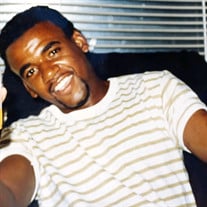 The passing of Mr. Aaron "Hank" Fitzgerald Stone, age 56, at Duke University Hospital, is being announced by his daughter Adrienne Nichelle Stone. Aaron was born to the late Mr. Willie Edward and Mrs. Mildred Loretta McIntyre Stone on December 19, 1964, in Durham, North Carolina. His birth name represents a delightful, yet historic tale. The name "Aaron" was given because his father admired Hank Aaron, one of the greatest baseball players who'd ever lived. As for Hank's middle name "Fitzgerald"...they chose it because both his mother and father admired the late President John Fitzgerald Kennedy (JFK) who fought for the Civil Rights Bill. Most knew his either as "Hank", "Hank the Bank" and "Hank Sweat". However, Hank Sweat became the most popular among the "Fayetteville Street Family" because he had a glorious tenor voice also which he used proudly, loudly and freely to entertain all in the area. Hank was a remarkably gifted bass player and keyboard player as well. He had a witty gift of gab and never met a stranger. Truly, his warm laugh and friendly smile will be forever remembered. Hank leaves behind his beloved and beautiful daughter, Adrienne Nichelle Rhodes (Rob); one of the most loving aunts anyone could ever ask for, Mrs. Doris Thomas; two sisters, Alice Stone (Jack) and Sheila Stone; four brothers, Victor Stone, Dean Stone (Pamela), Timothy Stone (Diane) and Michael Stone; and a host of nieces, nephews, cousins and friends. A graveside service of celebration to honor the life of Hank will be held on Thursday, June 17, 2021, at 11:20 a.m., at Beechwood Cemetery, 3300 Fayetteville Street, Durham, North Carolina, 27707, with viewing beginning at 11:00 a.m. Please keep this family in your thoughts and in your prayers.

The family of Mr. Aaron "Hank" Fitzgerald Stone created this Life Tributes page to make it easy to share your memories.

Send flowers to the Stone family.