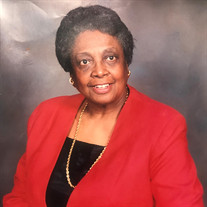 The passing of Alberta L. Allen, age 95, at Eno Pointe Assisted Living, is being announced by her family. Mrs. Alberta Leeper Allen, formerly of Charlotte, North Carolina, was born on April 7, 1927. She was educated in the Charlotte Public School System and graduated from West High School. Alberta attended Johnson C. Smith University but later graduated with honors from Good Samaritan Hospital School of Nursing in 1951. Upon graduation, she relocated to Durham, North Carolina. Alberta met and later married Edward A. Allen, Jr. of Durham, North Carolina, in 1953. The union was blessed with one son, Barry D. Allen. Mrs. Allen was a Registered Nurse for 35 years: six years at the Durham Veteran's Hospital and 29 years at Duke Medical Center. She retired as Nursing Manager from Duke Eye Center in 1985. After retirement, Alberta volunteered at Duke Eye Center, the Host Homes of Duke and the Durham Library Literacy Program by delivering literature to the visually impaired. Alberta was a former member of Friendship Baptist Church in Charlotte but became a longtime Peace Missionary Baptist Church member while residing in Durham. Her involvement in the church was numerous: Sunday School, the Nurses Health Ministry, recording/financial secretary, Senior Missionary Circle, Helping Hands Ministry member, Noonday Bible Study and was active in the Durham County Missionary Union. She was involved in the church life until her health declined. Mrs. Allen, along with Nora T. Allen, Ruth P. Amey, Lyda F. Betts, Susie C. Buie, Pauline Brooks, Hildred B. Clark, Evelyn H. Dudley, Norma Peddy, Gladys Swift and Lillian Thompson, became Charter Members of Pi Chapter, Chi Eta Phi Sorority, Inc. on April 30, 1955, a professional organization Scholarship Committee, and a number of other committees. She kept abreast of the sorority and nursing Tree Committee and provided much knowledge and wisdom for the ongoing success of the chapter as she served as the previous surviving Charter Member. Her dedication and longevity were recognized by the chapter on several occasions, including being a 2014 Inaugural Nursing Legend for members who were age 80 and above with ten years or more of continuous service; and in May of this year, the scholarship was renamed the Alberta Leeper Allen Scholarship. The inaugural scholarships will be awarded in 2022. Her other affiliations included: the Plum Street organization where she resided for 58 years; Lifelong Member of the National Council of Negro Women - Durham Section; and an NCNW - Durham Section Senior Jewel. She was also a member of the Durham Branch of the NAACP, Daughters of Dorcas and 1943 Hillside Hornets (wives of the football Hornets). Mrs. Allen was preceded in death by her husband, Edward, and her son, Barry. She leaves to cherish her legacy her grandchildren: Barry Allen II (Gemma), Brittany Marion (Brett) and Brandon Omnia Allen; their mother, Beverly Allen; one great-granddaughter, Renee Mariah Marion; one sister-in-law, Ethel Robinson (Aunt Ducky); good friend, Ms. Mary Burris (to whom the family is most grateful for her outstanding contribution to this Obituary); and a host of cousins, nephews, nieces and many friends. A service to celebrate the life of Alberta L. Allen has been scheduled for Saturday, December 11, 2021, at 11:00 a.m., at Peace Missionary Baptist Church, 2608 NC Hwy 55, Durham, North Carolina 27713, with a viewing beginning at 10:30 a.m. Mrs. Allen will be laid to rest in Glennview Memorial Park.

The passing of Alberta L. Allen, age 95, at Eno Pointe Assisted Living, is being announced by her family. Mrs. Alberta Leeper Allen, formerly of Charlotte, North Carolina, was born on April 7, 1927. She was educated in the Charlotte Public... View Obituary & Service Information

The family of Mrs. Alberta L. Allen created this Life Tributes page to make it easy to share your memories.

Send flowers to the Allen family.