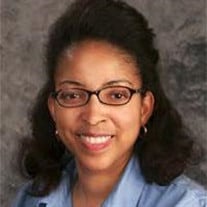 Alicia Bowser Moore passed away on Saturday, March 4, 2017, at Duke University Hospital in Durham, NC. She was the daughter of Lillian Jones Bowser and the late Edward Louis Bowser. Alicia was born on July 2, 1968, in Durham, NC. Alicia joined West Durham Baptist Church in Durham, NC, at an early age. She faithfully served in various roles including Vacation Bible School, the choir, and presenting church announcements. Alicia graduated from Northern High School in Durham, NC, with the class of 1986. Alicia continued her education at The University of North Carolina at Chapel Hill in Chapel Hill, NC, earning a Bachelor of Arts degree in Biology in 1991. In the fall of 1986, she became a member of Alpha Kappa Alpha Sorority, Inc. Alicia received her Master of Science degree in Zoology with a minor in Physiology at North Carolina State University in Raleigh, NC, in 2000. Alicia was employed with the National Institute of Environmental Health Sciences (NIEHS) in Research Triangle Park, NC, in 1991. She was a Research Biologist in the Molecular Pathogenesis Group, investigating the factors that may be involved in the pathogenesis of uterine leiomyomas “fibroids”. Alicia loved science and was dedicated to her work as a Research Biologist. She was published extensively in scientific journals, made significant contributions to numerous research protocols and presentations, and was well respected by her peers. Alicia received many awards and recognition – most notably the 2007 National Institutes of Health (NIH) Harvey J. Bullock, Jr. Award for Equal Employment Opportunity Achievement and a 2012 NIH Merit Award in recognition of her leadership promoting disability awareness and advocacy at NIEHS. Alicia married the love of her life, Rickie “Rick” Anthony Moore, in June 1997. Until 2015, they had a fun loving, faithful and beloved service dog, Kyoto. Alicia especially loved swimming and mentoring others. Later in life, she found enjoyment in bird watching and knitting. Alicia was kind to all and loved dearly by her family, friends, and community. She leaves to cherish her memories her devoted husband and caregiver of almost twenty years Rickie Anthony Moore of Spring Hope, NC; mother, Lillian Jones Bowser of Durham, NC; adoring sister, Julie Francesca Bowser of Atlanta, GA; grandmother, Ernestine McWilliams Bowser of Roanoke Rapids, NC; angel nurse, Carolyn Williams of Durham, NC; four sisters-in-law, five brothers-in-law, and a host of aunts, uncles, cousins, and other dear relatives and friends. Alicia’s homegoing service will be held Saturday, March 11, 2017, at West Durham Baptist Church, 1901 Athens Street, Durham, NC 27707. Visitation will be from 11:00 a.m. to 11:45 a.m., service will begin at 12:00 p.m., and the repast will be held in the Fellowship Hall immediately following the interment at Maplewood Cemetery, 1621 Duke University Road, Durham, NC 27701.

Alicia Bowser Moore passed away on Saturday, March 4, 2017, at Duke University Hospital in Durham, NC. She was the daughter of Lillian Jones Bowser and the late Edward Louis Bowser. Alicia was born on July 2, 1968, in Durham, NC. Alicia joined... View Obituary & Service Information

The family of Mrs. Alicia Bowser Moore created this Life Tributes page to make it easy to share your memories.

Send flowers to the Moore family.