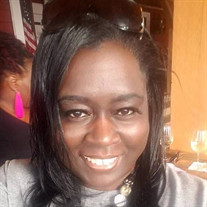 Condolences are being expressed to the family of Ms. Anissa "Nissy" Barbee, age 45, who passed away on Monday, April 20, 2020, at Duke University Hospital. Anissa Barbee, the daughter of the late Larry Donell Barbee, Jr. and Precisus Barbee Curry was born on October 24, 1974 in Durham, North Carolina. Known to all her friends as Nissy, at an early age she attended Shiloh Missionary Baptist Church in Morrisville, North Carolina. In 1993, Anissa moved her membership to Greater Emmanuel Temple of Grace where she was baptized and filled with the Holy Ghost. She was a loyal and faithful member who sung with the Praise Crusaders and a member of the Mass Choir. Anissa graduated from C.E. Jordan High School and received her Master's Degree at Strayer University. Anissa was very active in the community. She was a co-founder of Non Pro Management; She was on the Board of Directors as the CFO of Know Your Self Worth, Inc.; She was an affiliate of the NC Honors Award Show; She was a member of ACHI WSWA; She was a Board member of the Greater Durham Black Chamber of Commerce and an Advisory Board Member of Tru Horizons. In 2013, Anissa established her own tax business called "Transformation Tax". She was known as the "Tax Chick". She not only did taxes, but held classes to educate everyone who wanted to know anything about taxes. Anissa is preceded in death by her father, Larry Donell Barbee, Sr. Anissa leaves to cherish her memories her mother Precisus and step-father Michael R. Curry; brother, Larry Donell Barbee, Jr.; nephew, Larry Donell Barbee, III (aka) Tripp; aunts, Patricia Evans (William), Vandora Perkins, Annie Taborn, Vanessa Dorsey (Richard), Jennifer Daye and Mary Barbee; uncle, Coy Lee Smith, Jr. (Shirley); one God-daughter, Tyria Smith; two incredibly special friends, Kera Hansil and Tiesha Frontis; four amazing caregivers (her cousins); LaKeshia Peaks, Erika Dorsey, Tara Wiley and Brittney Dorsey; and a host of extended family members and friends. Anissa's memories will live on in the many lives she has touched. Viewings for Ms. Anissa Barbee are scheduled for: -Sunday, April 26, 2020, from 11:00 a.m. - 2:00 p.m. at Scarborough & Hargett Celebration of Life Center, Inc., 309 N Queen Street, Durham, North Carolina 27701 -Monday, April 27, 2020, from 11:00 a.m. - 1:00 p.m. at Greater Emmanuel Temple of Grace, 2722 East Main Street, Durham, North Carolina 27703. Interment will take place in Woodlawn Memorial Park, 2107 Liberty Street, Durham, North Carolina 27703.

Condolences are being expressed to the family of Ms. Anissa "Nissy" Barbee, age 45, who passed away on Monday, April 20, 2020, at Duke University Hospital. Anissa Barbee, the daughter of the late Larry Donell Barbee, Jr. and Precisus Barbee... View Obituary & Service Information

The family of Ms. Anissa "Nissy" Barbee created this Life Tributes page to make it easy to share your memories.

Condolences are being expressed to the family of Ms. Anissa &quot;Nissy&quot;...

Send flowers to the Barbee family.