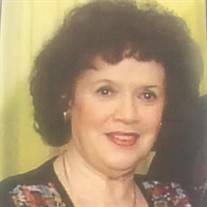 The family of Dr. Ann Henderson Brockenborough, age 80, announces her passing which occurred on Wednesday, September 11, 2019, at Transitions Hospice Care in Raleigh, North Carolina. Carol-Ann Henderson Brockenborough, Ph.D. was born in Durham, North Carolina on December 4, 1938, the first of two children to the late James J. "Babe" and Julia (Hicks) Henderson. She inherited a rich legacy of family, faith, leadership and character. Ann enjoyed an active childhood exceling in her studies, athletics and other extra-curricular activities. She was an engaged member at St. Joseph’s A.M.E. church in Durham, participated in social activities with Jack & Jill of America, Inc. and spent many summers at Camp Atwater in North Brookfield, Massachusetts where she made lifelong friends. Ann traveled to compete in tennis tournaments throughout the southern US, winning numerous trophies and accolades through her participation with the American Tennis Association (ATA). A product of Durham Public Schools, Ann excelled and went to the "Head of the Class", as her father always encouraged. She graduated from Hillside High School in 1956 and followed his footsteps by attending Hampton Institute in Hampton, Virginia. Ann flourished during her time at her "Home by the Sea". She was initiated into the Gamma Iota Chapter of Delta Sigma Theta Sorority, Inc. and was named Miss ROTC. Ann received her degree in Speech Correction from Hampton in 1960 and relocated to Philadelphia, Pennsylvania to pursue her post-graduate studies at Temple University. She earned a Master of Arts Degree in Speech, Language and Hearing Science and went on to achieve her Ph.D in Philosophy. In her professional life, Dr. Henderson was a dedicated educator who worked with young children who had speech and language difficulties. A consummate professional who maintained uncompromising principles, Ann touched many lives through her work. A universally respected leader in her field, in the early 1970’s, she founded the PEACH program, an organization with a mission to enrich, improve and empower the lives of 3-4 year olds. Leaders in her field lauded her work and she appeared on NBC’s Today Show to discuss groundbreaking policy related to Special Education. Dr. Henderson was a member of the Board of Directors for the Maryland School for the Deaf. In the 1990’s, Ann retired following over thirty years of service as a speech language pathologist and administrator in the Child Find Early Intervention Programs in Montgomery County (Maryland) Public Schools. In 1983, Ann married the love of her life, Bland T. Brockenborough, affectionately known as “Brock”, who she met at Hampton. Their reunion lasted 25 years. The couple traveled to all parts of the United States and many destinations abroad, exploring countries in Africa, South America, Europe and Asia. After retiring, she and Brock relocated to Cary, NC. Ann was instrumental in planning her mother’s 100th birthday celebration in 2006—a momentous celebration that drew over one hundred family members and friends. Ann was proud of her family, as they were of her. She especially enjoyed their fellowship during bi-annual Henderson Family Gatherings. She was a member of the National Hampton Alumni Association, Inc., a 50+ year member of Delta Sigma Theta Sorority, Inc. where she held chapter leadership roles, and like her mother, was an active member of the National Community Service organization, Girlfriends, Inc. Ann worked hard for whom and what she held dear. Her love for her family, friends, community and country was indicative by her daily actions, as well as the worthy causes for which she contributed. She was a woman of extraordinary dignity and grace, with charm, wit and personality to spare. Ann was indeed sophisticated, with an impeccable sense of style only matched by her trademark, infectious smile. Ann is survived by her brother, James J. “Biff” Henderson, Jr.; sister-in-law, Carolyn (McIntosh) Henderson of White Plains, NY; one niece and grand-niece, Celeste Henderson Woods and Sydney Woods, Laurel, Maryland; one nephew, James J. Henderson, III, Port Chester, NY; two aunts, Wyonella Smith, Chicago, IL and Anna-Pearl Henderson, Austell, GA; as well as a host of cousins, colleagues and friends who will miss her dearly. A celebration of Ann's life will be held at St. Joseph A.M.E. Church, 2521 Fayetteville Street, Durham, North Carolina, 27707 on Saturday, October 12th; Family Visitation at 10:00 a.m. and Life Celebration Memorial Service at 11:00 a.m. Mrs. Carol-Ann Henderson Brockenborough will be laid to rest in Beechwood Cemetery.

The family of Dr. Ann Henderson Brockenborough created this Life Tributes page to make it easy to share your memories.

Send flowers to the Brockenborough family.