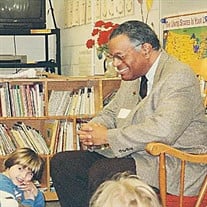 Arthur John Howard Clement, III (82), was born on March 12, 1934 in Cleveland, North Carolina to Arthur John Howard Clement, Jr. and Irma Robinson Clement. He passed peacefully from this world on May 25, 2016 at his home in Durham with his devoted wife, Annie Davis Clement. He is survived by his three loving daughters (with his deceased wife Dolores Williams Clement of 41 years), Irma Clement of Cliffside Park, NJ, Saundra (Brian) Daniels of Durham, and Marcella Clement of Charlotte. He is also survived by Annie’s children, Albert Jones (Karen) of Charlotte, Anna Croley (Gilbert) of Atlanta, Alexis Brown (Lawanda) of Atlanta, and Amanda Harris of Atlanta. His love extended to his grandchildren, Brian Keith Daniels II, Kayla Arielle Clement Daniels, Arthur John Howard Clement VI, Brooks Brown, Alex Brown, Ryanne Hill, Ashley Brown, Alexandria Brown, Adrianna Brown, Taylor Croley, Alex Croley, Velanie Croley, Gilbert Croley, Michael Harris, Kaitlyn Harris, Chaz Jones, Aric Jones, Bryce Jones, Dia Jones and five great-grandchildren. He also leaves to mourn his brother, William Clement (Margaret) from Bend, OR and a host of nieces, nephews and cousins. Howard graduated from Avery High School in Charleston, SC. He obtained his undergraduate and law degrees from Howard University. He was a Life Member of Alpha Phi Alpha Fraternity, Incorporated where he was initiated at Howard University in 1952. He was a Life Member of the NAACP. He served as legal counsel for North Carolina Mutual Life Insurance Company and was on the Durham City Council for 30 years. His many accomplishments are chronicled in his papers, which he donated to the Durham County Library’s North Carolina Collection. In accordance with his wishes, the family has announced there will be “no funeral services or otherwise” in observance of his passing. It is requested in lieu of flowers, donations be made to the Howard Clement Educational Fund with the Franklin Templeton Charitable Giving Fund, Renaissance Charitable Foundation, Inc., 6100 West 96th Street, Suite 105, Indianapolis, IN 46278. In the near future, there will be an event to celebrate Howard’s life.

The family of Mr. Arthur John Howard Clement, III created this Life Tributes page to make it easy to share your memories.

Send flowers to the Clement family.