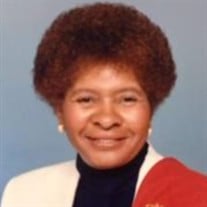 Bena Frances Nunn Mitchell entered gracefully in this world on May 15, 1934 in Orange County, North Carolina. She departed just as gracefully on May 15, 2020 at Duke Regional Hospital, Durham, North Carolina. She was the fourth of seven children born to George Samuel and Patti Evelyn Roberson Nunn. At an early age, she accepted Jesus Christ as her Lord and savior as she joined Mount Sinai Missionary Baptist Church. It was also at Mount Sinai, where she met her future husband, the Reverend Cecil Ray Mitchell. Bena and Mitchell (as she would lovingly call him), were married on July 25, 1959 in Raleigh, NC. To this union, she gave birth to their only child, Cynthia Maria. She received her formal education from Durham County Schools. She graduated from Merrick Moore High School in 1952, where she was voted “Most Prettiest Girl” in her class. Bena found her passion for bookkeeping at Carolina Friends School for 24 years before retiring in 1996. She prided herself for “never making a mistake” on their payroll. She was faithful and passionate in her service to her family, her church, and the community. As an active member of the Minister Wives, Minister Widows Association, she served in several positions including President and Treasurer. She was also a lifetime member of the International Minister Wives, Minister Widows Association. At Mount Sinai, she was a member of the A.T. Alston Chancelor Choir where she served as choir director and president for several years. She remained a faithful member until her health declined. Bena and Cecil were blessed to share in 50 years of marriage before his death in 2009. In addition to her parents, she was preceded in death by her siblings Johnsie Bell Nunn, James William Nunn, Wallace Charles Nunn, and Doris Mae Armstrong. She leaves to cherish her memories one daughter Cynthia Maria and son-in-love, Kenneth Alexander, Sr.; four grandchildren, Kanesha, Courtney, Kenneth Jr. and Ceciley; five great-grandchildren, Juliya, Javon, Madison, Riley and Khloe; two sisters, Shirley Alston and Georgia Purefoy; four sisters-in-law, Helen, Annie Laura, Mildred and Garnelle; a special brother, Christopher Couch; and a host of nieces, nephews, cousins and friends. Viewing for Mrs. Bena Frances Mitchell will take place on Friday, May 22, 2020, from 3:00 p.m. - 6:00 p.m. at Scarborough & Hargett Celebration of Life Center, Inc., 309 N Queen Street, Durham, North Carolina 27701. A private funeral service will take place for Mrs. Bena Francis Mitchell and she will be laid to rest in Mt. Sinai Missionary Baptist Church Cemetery.

The family of Mrs. Bena Frances Mitchell created this Life Tributes page to make it easy to share your memories.

Bena Frances Nunn Mitchell entered gracefully in this world on...

Send flowers to the Mitchell family.