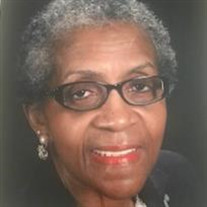 The family of Ms. Betsy Ann Webb, age 73, announces her passing which occurred on Friday, December 20, 2019, at Duke Regional Hospital. Betsy Ann Webb, also known as "BA" and "BessAnn", was born October 14, 1946 in Durham, North Carolina to the late Bunny Webb and Flossie Crabtree Jones Webb. She was one of two children born to this union, and the forth of five siblings born to Mrs. Webb. Betsy attended Lyon Park Elementary School, Whitted Jr. High School, and graduated from Hillside High School in 1965. She attended Croft Business School and earned an AA degree in Business/Secretarial Science. Betsy was employed at Lincoln Hospital/Durham Regional Hospital (now Duke Regional) for 26 years as an Administrative Assistant. She retired from Duke Regional in 1995. Subsequently, she was employed at North Carolina Central University for 14 years as an Administrative Assistant and later as an Executive Assistant in the School of Library Science. She retired from employment at North Carolina Central University in 2010. Betsy joined First Calvary Baptist Church when she was seven years old and has been a life-long member. Throughout the years as a church member, Betsy was active in all of the choirs: Children's Choir, Young Adult Choir, Psalm 150 and the Mass Choir. She studied music early in life and was able to play the piano quite well. She was very active with the class activities for the Hillside High School Class of 1965. Betsy attended every reunion since their graduation. She was also an active member of the West End Reunion, and attended every reunion except in 2019. Her other interests included listening to music, watching TV and talking to friends. She also liked to cook. She was often asked to make the potato salad for social gatherings. While she was able, she enjoyed dancing. Until about two years ago, she participated in the downtown Senior Center Activities. Betsy loved animals and has always owned a pet or several pets simultaneously since childhood. Her animals reciprocated her love and tended to live long comfortable lives. Her friends would often tell her that if they became animals, they would want to come back as one of her pets. If she came upon an injured animal in the street, she would help it or call the police department to seek help for it. Many of her animal were "strays" or were obtained from animal rescue shelters. Betsy was preceded in death by her brother, Fred L. Jones and a sister, Helen King Jones Drake. She leaves to cherish her memories her two sisters, Gizette Webb and Thelma Lee; nephew, Ronald Britton; many cousins, Lola Brown (Chuck), Karla Williams (Derrick), Rod Barbee, Charlene Clay (Tyrone), Marsha Hines (Kenny) and Virginia Purefoy Jones; special friends, Helen Shaw Forte, Sandra Jackson, Alice Baily, Sylvia Scott, Emily and Charlie Scott and Vincent Ryan and brothers; favorite bosses, Dr. Benjamin Speller and Dr. Irene Owens; and a host of other relatives and friends. A celebration of Betsy's life will be held at First Calvary Baptist Church, 1311 Morehead Avenue, Durham, North Carolina 27707 on Friday, December 27th; Family Visitation at 11:00 a.m. and Life Celebration Service at 12:00 noon.

The family of Mrs. Betsy Ann Webb created this Life Tributes page to make it easy to share your memories.

Send flowers to the Webb family.