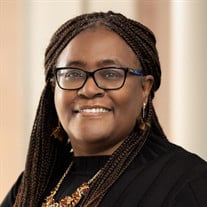 Browne C. Lewis, age 60, Dean of the North Carolina Central University School of Law, entered into eternal rest on Thursday, June 2, 2022. Browne C. Lewis was born on January 27, 1962, to the union of the late Joe and Josephine Lewis in the small town of Natchez, Louisiana. She was very proud of her small community and the community was proud of her and even made her the Grand Marshall of the Annual Heritage Festival. She was a small- town girl who was determined to see the world. She traveled out of the country extensively and left her mark everywhere she traveled. Browne confessed Christ at an early age and became an active usher, choir member and youth leader at Morning Star Baptist Church of Natchez, Louisiana. She resided in various states and attended various churches. Her final church home was Providence Baptist Church in Cleveland Ohio with Rev. Rodney Maiden as Senior Pastor. For as long as we can remember, she wanted to be an agent of change. This passion led her to pursue a career in law. After completing St. Matthew High School, she enrolled at Grambling State University graduating at the top of her class with a B.A. in Political Science. Prior to attending law school, she received summer fellowships to study at Carnegie- Mellon University, the Humphrey Institute at the University of Minnesota, and the John F. Kennedy School of Government at Harvard University. She earned an M.A. in Public Policy (Economics and Statistics) from the Humphrey Institute. Then, she earned her J.D. from the University of Minnesota School of Law. Showing her commitment and passion for higher education, she received an LLM in Energy and Environmental Law from the University of Houston School of Law. Browne also spent several summers studying abroad. A prolific legal scholar, Browne did research in the areas of arti cial intelligence, assisted reproductive technology, environmental racism and inheritance law. Her scholarship has appeared in prominent law reviews. She is the author of several books, among them are Papa’s Baby: Paternity and Artificial Insemination and The Ethical and Legal Consequences of Posthumous Reproduction: Arrogance, Avarice and Anguish. Her accolades are too numerous to list, but to name a few – Browne was a Core Fulbright Scholar at King College in the United Kingdom. After being one of only six law professors selected as a Robert Wood Johnson Public Law Scholar, she worked with the Public Health Department to study the public health consequences of allowing minors to purchase small cigars. Browne was the Leon and Gloria Plevin Professor of Law and Director of the Center for Health Law & Policy at Cleveland-Marshall College of Law, Cleveland State University. Browne has made numerous national and international presentations. She was a guest lecturer at the International Congress on Law and Mental Health in Rome, Italy and Prague, Czech Republic. She also lectured at the World Congress on Bioethics, Medical Ethics and Health Law in Jerusalem, Israel and Limassol, Cyprus. She warmly recalls traveling to a New Zealand Bioethics Conference in Dunedin, New Zealand and losing her laptop thus requiring her to write a final chapter in an upcoming book on her cell phone. Notwithstanding her many achievements, there is no doubt that being named Dean of the North Carolina Central University School of Law was her crowning achievement. This role married her love for HBCUs with her passion for academia and the law. Although her tenure was challenged by COVID and its impact, she persisted in focusing on excellence at every level by enhancing and adding programs, services and resources. The upcoming launches of the NCCU School of Law Technology Center and the Social Justice and Racial Equity Institute are due to her vision, hard work and commitment to expanding the law school’s programs to ensure the law students were prepared for emerging careers in the legal profession. On a personal note, Browne enjoyed painting, playing her guitar and the piano. Her favorite holiday was Christmas, and she decorated her house with at least seven trees. She planned all her family’s vacations and never missed acknowledging birthdays. She loved writing mystery novels based on family experiences. She was fortunate to have longtime friends who became part of her family; her girls’ trips and other excursions, including her 60th Birthday Celebration in January 2022, were times she truly treasured. She was preceded in death by her beloved parents Joe and Josephine Lewis, three brothers, Batt Lewis, Nova Blount, Glenn Timmons and one sister, Gloria Lewis Middleton. She leaves to mourn, ve sisters: Emma Lewis Rogers, Ora Bell Lewis, Evon Lewis Williams (Oliver), Emma S. Lewis and Jeanie Palmer and two brothers Don Lewis and Joe Lewis Jr., Esq. Although she did not have any biological children, her nieces, nephews and law students were viewed as her children. Her mantra was “what God has for me, is for me.” God allowed her to ful ll many of her expectations. Her favorite scripture, undoubtedly quoted hundreds of times, was Jeremiah 29:11 – “For I know the plans I have for you, declares the Lord, plans to prosper you and not to harm you, plans to give you hope and a future.” The Lewis Family will be forever grateful to the Creator for blessing and prospering her to live a life of purpose. Services to honor, and to celebrate the life of Dean Lewis will take place on Tuesday, June 21, 2022; viewing from 11:00 a.m. - 12:55 p.m. and the Celebration of Life Service at 1:00 p.m., at St. Joseph AME Church, 2521 Fayetteville Street, Durham, North Carolina 27707. The Homegoing Service will be streamed live via the St. Joseph AME Church's website at https://www.stjosephame.org/watch. Browne C. Lewis will be laid to rest in The Morning Star Baptist Church Cemetery, Natchez, Louisiana, on Monday, June 27, 2022.

Browne C. Lewis, age 60, Dean of the North Carolina Central University School of Law, entered into eternal rest on Thursday, June 2, 2022. Browne C. Lewis was born on January 27, 1962, to the union of the late Joe and Josephine Lewis in the... View Obituary & Service Information

The family of Ms. Browne C. Lewis created this Life Tributes page to make it easy to share your memories.

Send flowers to the Lewis family.