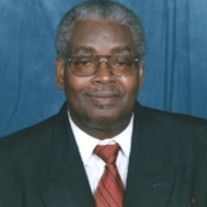 Burley McCoy Clayton was born on March 8, 1946 in Person County, North Carolina to the late Burley Hambrick Clayton and Alice Marie Green. He transitioned from this life to life eternal with Jesus Christ on Thursday afternoon, December 14, 2017 at Duke Regional Hospital, Durham, North Carolina. His sister Alice Faye Clayton preceded him in death. Burley joined New St. James Missionary Baptist Church at an early age and was faithful to his church where he served as a deacon and was a past chair of the church’s Finance Committee. Burley loved his family and his church with all of his heart. He especially had a reservoir of devotion to his wife of 50 years, Joyce, his son, Lucious Alvin Clayton, and his lovely wife, his new daughter, Latrise Collins Clayton. Burley was a man of strong faith and he enjoyed living! He persevered through many hardships awaking each morning with joy- thanking God for all His many blessings and for one more day. He loved Sunday School and Bible Study and prepared for the lessons with conviction! He was very passionate about the news shows and westerns on television and would be found often talking back to the television. He loved singing in the Male Chorus at New St. James until his health declined. His love for his wife was known by many as he called her “Beautiful.” He was a devoted husband, father, provider, thinker, and best friend! Burley’s life’s journey included serving his county in the U.S. Army during the Vietnam War with honor. He received during his 2 years of service the following commendations: National Defense Service Medal, Vietnam Service Medal, W/2 Bronze Stars; Republic of Vietnam Campaign Medal, W/Device 1960; 1 O/s Bar; Expert (Rifle M-14), and a Good Conduct Medal. Burley utilized his God given talents and gifts in many ways. He served as The Director of Purchasing and Contracts with The County of Durham, NC for 16 years with distinction until his early retirement. Prior to his work with the county, Burley served as an accountant with the Finance Department at the City of Durham. He also served in earlier years an administrative position with Crum and Foster Insurance Company in Durham, North Carolina. He received awards and recognitions during his professional career for his outstanding accomplishments. Burley attended North Carolina Central University where he received a BS Degree and MBA Degree. He was both analytical and logical. He also had a sense of humor and pride. Burley leaves to cherish his memory his beloved wife Rev. Joyce Daye Clayton (“Beautiful”), his son, Lucious Alvin Clayton and his wife, Latrise Clayton, four brothers: Larry H. Clayton and wife Joan; Walter Clayton and wife Alisa; Douglas B. Clayton and wife Centerethia and Donald Clayton; five sisters: Joan C. Clayton-David and husband Biars; Dr. Linda A. Clayton and husband (Dr. Michael Byrd); Maxine C. Clayton Bass; Doris L. Clayton- David, and Judy S. Clayton; and a host of loving cousins, nieces, nephews and friends. William C. Daye (W.C.), his brother-in-law, was a very special friend and a brother. Cousins Percy and Nathaniel Clayton and Rena Clayton Clement are his beloved brothers and sister, too. Burley’s favorite scripture “The Lord is my shepherd, I shall not want” (Psalm 23:1) was a guiding light for him during his later years. May he rest in the peace and the love of Our Lord and Savior Jesus Christ! 

The family of Mr. Burley McCoy Clayton created this Life Tributes page to make it easy to share your memories.

Send flowers to the Clayton family.