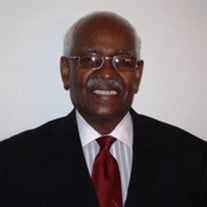 Connia Henry Watson, Jr. (84) of Durham, NC was born in Charlotte, NC on January 1, 1936 and was called to his eternal home on August 25, 2020. He became ill in the fall of last year, but continued to remain active in his church and community. Connia spent his primary and secondary school years in Salisbury, NC. He graduated from Price High School where he was an excellent academic student and performed very well athletically – becoming one of the “Four Horseman” running backs on their state champion football team. He was an inductee in the high school’s athletic Hall of Fame. Post high school, Connia became a 1957 graduate of North Carolina College at Durham (now North Carolina Central University) with a degree in Chemistry. After college, he began his career working in Washington, DC and then New York City, before returning to North Carolina and starting his life’s work with The North Carolina Mutual Life Insurance Company. Connia demonstrated a strong acumen for this business early and he quickly earned increasing positions of responsibility and was awarded “Manager of the Year” in 1967. While progressing in his career, he prepared for and achieved the Chartered Life Underwriter designation (CLU). Connia ultimately became the company’s Vice-President, Agency Director and served in that capacity until his retirement in 1990. Connia Watson, Jr. has been a long-time, active member and supporter of the Covenant Presbyterian Church in Durham. At Covenant, he sang in three choirs, served as Chairman of the Budget/Finance Committee and he very proudly served as one of the mentors for youth in a neighboring community to the church. In addition, his service to the church extended to the broader Presbytery body where he served as Commissioner to the Presbyterian General Assembly. Serving the Durham community was of great importance to Connia. He served on the Durham Board of Adjustments and chaired the board for six years, he served on the boards of the Urban Ministry Center, and the Greater Durham Black Chamber of Commerce, and for many years, he operated as President of North Carolina Mutual Retiree Club. He was also a member of Omega Psi Phi Fraternity, Inc. Connia was a devoted husband, father, brother, grandfather, great-grandfather, and uncle. He was preceded in death by his parents Connia H. Watson, Sr. and Mabel S. Watson, and his son-in-law, Myles K. Hudson. Connia is survived by his wife, the former Zelphia Gray; his children, Cheryl W. Hudson, Gregory A, Watson and Gena Watson (daughter-in-law); sibling, Odell Watson and Annette O. Watson (sister-in-law); grandchildren, Dr. Courtney Hudson Hinton and Derrien Hinton (grandson-in-law), Kevin G. Hudson and Carter Cundiff, Gregory A. Watson, Jr. (Alan), Andrew C. Watson (Drew), Elan M. Watson; great-grandchildren, Aiden Hinton and Preston Hinton. A host of nieces, nephews, cousins and friends whom he loved dearly. In lieu of flowers, please consider honoring Connia’s memory by contributing to Covenant Presbyterian Church Men’s Council Mentoring Program. A graveside service of celebration has been scheduled for Wednesday, September 2, 2020, at 12:00 noon at Beechwood Cemetery, 3300 Fayetteville Street, Durham, NC, 27707, with viewing from 11:30 a.m. - 12:00 noon. In every effort to protect our families and their guests, face coverings are required.

Connia Henry Watson, Jr. (84) of Durham, NC was born in Charlotte, NC on January 1, 1936 and was called to his eternal home on August 25, 2020. He became ill in the fall of last year, but continued to remain active in his church and community. Connia... View Obituary & Service Information

The family of Mr. Connia Henry Watson, Jr. created this Life Tributes page to make it easy to share your memories.

Send flowers to the Watson, family.