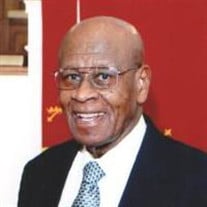 Reverend Doctor Coolidge McCoy was born February 10, 1929 first child of the late Bishop Samuel George McCoy, Sr. and the Late Lucretia Allen McCoy. He departed this earthly journey on Wednesday, December 31, 2014. On September 2, 1955 he married Lillian Noble. To this union one child was born Shelia Rena McCoy. Reverend McCoy was a caring and sharing person, he was all about love and love was the source of his joy so much so the press often wrote articles concerning his love and action. He used I Corinthian 13 Chapter for his guide as a policeman and preacher. All who knew him were uplifted by his caring attitude. Reverend McCoy had one brother Samuel George McCoy, Jr. (deceased). He leaves to cherish his memory his wife Lillian Nobles McCoy; one daughter, Shelia Rena Bryant of Columbia, SC; two grand sons, Sean Christopher Bryant and Marcus Bryant of Columbia, SC; one god daughter, Ann Harris of Winston Salem, NC; four sisters, Mabel Landis of Creedmoor, NC, Janice (Lester) Miller of East Orange, NJ, Agnes (Johnny) Maske of Wake Forest, NC and Vivian McCoy of Durham; one sister-in-law, Queenie Upchurch and a host of nieces, nephews and other relatives and friends. Funeral service will take place on Tuesday, January 6, 2015 at Peace Missionary Baptist Church, 2608 Nc Highway 55 - Durham, NC - 27713, beginning at 1 p.m. A visitation with family and friends will be held one hour prior to the service.

The family of Reverend Coolidge McCoy created this Life Tributes page to make it easy to share your memories.

Send flowers to the McCoy family.