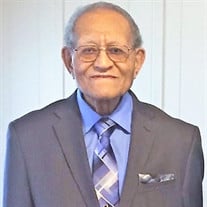 Deacon Emeritus Coy William Parker, son of the late Earlie Earl Parker, Sr., and Emma Virginia Parker, was born July 13, 1936, in Wake County, N.C. He was called to rest, and departed this life victorious, on Thursday, June 14, 2018, at Duke Regional Hospital. Deacon Parker was a 1955 graduate of the W.E.B. DuBois High School in Wake Forest, N.C., and was a member of the school's varsity basketball team. He furthered his education as a student at NC A & T State University, studying a variety of courses in English, Math, Science and Agriculture. He continued his studies and later went on to receive an Advanced Certificate in Venture Management from the University of North Carolina School of Business Administration. He had an established career in the grocery business, working for 19 years as an employee of the Atlantic and Pacific Tea Company Grocery Store, the "A&P" as known by the local community. He was one of the first to lobby for a union and to go on strike for improved wages and employee benefits; and a union was soon established at the company. In the mid 70's he was selected to establish, manage and lead, United Development Inc., (UDI) the first of what was hoped to be a series of grocery stores throughout the black community. UDI's theme was, "people before profits" and "a better buy at UDI" and he was proud to have served in a variety of capacities, from clerk to night manager, to front end supervisor, remaining with the company for 26 years until his retirement. He was known and respected for his work ethic, community outreach and service to others. Deacon Parker was a faithful member of Faith Tabernacle Pentecostal Church of Durham, Inc. He was ordained as Deacon on March 20, 1977, by then Pastor, the late Reverend James Brown. He worked diligently within the church and served in many capacities, as a member of the Faith Tabernacle Male Chorus, the Faith Tabernacle Men in Action Auxiliary and Chairman of the Church Building Fund, helping to oversee the construction of the church. Although he suffered many afflictions, he never allowed his physical ailments to hinder his spiritual walk with God, faithfully attending and joyfully participating in every service he was able to. He dedicated his life and service to the cause of Christ and his works speak for him. Affectionately known by family and childhood friends, as "Agg", Deacon Parker earned his nickname by the playful and mischievous pranks of his youth, often aggravating family and friends and resulting in him spending time on the "mourners bench" at Chestnut Grove Baptist Church, his childhood church. He loved people and lived a vibrant and full life. He enjoyed gospel quartet singing, loved fried chicken, a fresh tomato sandwich, and homemade "chow-chow". He was often caught watching "SpongeBob Square Pants" cartoons, long after his grandchildren had grown up and left the care of his home. He was a fun-loving man with a bright smile, who never met a person he considered a stranger. He was a devoted husband, father, and grandfather, who is loved, missed and will always be cherished. He was preceded in death by his parents, Mr. Earlie Earl Parker, Sr., and Mrs. Emma Virginia Parker; two brothers, Mr. Earlie Earl (Jake) Parker, Jr., and Mr. Joseph McDaniel (Joe) Parker; three sisters, Mrs. Barbara Jean Parker Cornick, Mrs. Luna Mae Parker Allen, and Mrs. Emma Ree Parker Griffin; and his beloved daughter, Marjorie Parker. He leaves to celebrate his legacy, his wife of 61 years, Margie May Johnson Parker; his children, Coy, Jr. (Wanda) Parker, Annette Parker Madden, and Earl Parker of Durham, N.C.; Charlotte Parker of Raleigh, N.C.; two brothers, Percy Parker and Reginald Parker, of Raleigh, N.C.; three sisters, Rosa Parker Laws of Wake Forest, N.C., Percell Parker Harris and Sarah Mae Parker Terry, both of Raleigh, N.C.; four grand-daughters, Jessica, Marjorie, Catherine, and Anna; one grand-son, Daniel, and a host of nieces, nephews, cousins, family, friends, and Church family.

The family of Mr. Coy William Parker created this Life Tributes page to make it easy to share your memories.

Send flowers to the Parker family.