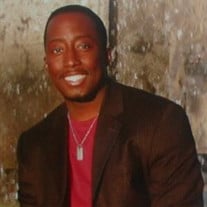 Darryl Eugene Smith, age 50, of Durham, N.C. passed away peacefully on Tuesday, July 3, 2018, after a lifelong battle with sickle cell disease. Darryl was born in Munich, Germany on February 23, 1968 to Gene and Ruth Ann Smith. After his father's service in the Vietnam War, the family relocated to Fayetteville, N.C., where his father continued to serve our country as a Master Sergeant and his mother stimulated youthful minds, as a mathematics teacher in the Cumberland County School System. Although Darryl was diagnosed with sickle cell disease at six months old, he always grabbed life by the horns, pushed himself to the limit and embraced the consequential notion of possibility. In spite of his inability to participate in competitive sports as a result of his illness, he became the manager of Terry Sanford High School's football and basketball teams and an announcer at basketball games. He also served on the Student Council and graduated in the top 5% of his class. Darryl's academic achievements, leadership experiences and service within the community and church aided in solidifying an academic scholarship to Duke University. While attending this prestigious university, Darryl pledged the Kappa Omicron Chapter of Alpha Phi Alpha Fraternity, Inc. and served as Treasurer and Dean of Intake. Most influential was the bond forged between him and nine line-brothers from diverse backgrounds that strived for academic excellence and positive impact on society. He graduated from Duke University with a Bachelor of Arts in Public Policy and Economics, as well as a Master's in Education from Virginia Commonwealth University. His passion to educate and to mentor youth led him to teach mathematics in the Richmond City School System and become head coach of the girl's basketball and track teams. Tapping into his ability to command a room and adequately disseminate information, Darryl became a Specialty Biological Sales Representative for Abbott (Abbvie) Laboratories. During his pharmaceutical sales career he received many awards for exceeding sale quotas, developing effective training material and exceptional verbal communication skills. Advocating for individuals with sickle cell disease was always important to Darryl. He spoke at numerous conferences and organized several community events regarding educational awareness and treatment of people with sickle cell disease. Darryl was also a member of the Duke Emergency Department Sickle Cell Assessment of Needs and Strengths (ED-SCANS) Quality Improvement Team, which aimed at enhancing the care of adults with sickle cell disease in the ED by implementing process changes for rapid pain relief, raising perception of patient population and developing a screening and referral program to identify individuals with social and behavioral health needs. Due to his efforts, a multitude of newspaper and magazine articles have been published highlighting Darryl's erudition and activism. Darryl accepted Jesus Christ as his Lord and Savior at a very young age and was baptized at First Baptist Church, 302 Moore Street, Fayetteville, N.C. He was very active in youth programs by singing in the youth choir, being presented in the Debs and Beaus of Christ program and serving as Co-Chair of Youth Day and President of Royal Ambassadors. As an adult, he continued his service to Jesus Christ at Union Baptist Church as a member of the male chorus, mentoring juvenile males and tutoring junior and high school students. Darryl was a brilliant, funny, charismatic, loving, compassionate, family oriented, supportive and giving individual who lived life to the fullest. His unwavering faith, strength, positivity, perseverance, genuinely kind-hearted soul and infectious smile touched the lives of so many people. He loved the arts, traveling, his robotics collection, attending Duke basketball and Pittsburgh Steeler football games, orchestrating social gatherings and trying absolutely anything once. Darryl was a buccaneer and most definitely celebrated life! Darryl married Veronica Mbaneme on September 5, 2009 in Saint Thomas, US Virgin Islands and she survives. Also surviving are parents, Gene and Ruth Smith of Fayetteville, N.C.; sister, Wendy Tonic (Jeff) of Prince Frederick, M.D.; in-laws, Peggy Mbaneme and Frederick Lutz (Tiffany) of Wendell, N.C.; four nieces, Sydney, Madison, Ahnesti and Dorian; two nephews, Ayden and Adam; and a host of aunts, uncles, cousins and long-life friends. He will be truly missed and his memory will be cherished forever. In lieu of flowers, the family request memorial contributions be made to the Sickle Cell Disease Association of America, sicklecelldisease.org, 3750 Koppers Street, Suite 570, Baltimore, M.D. 21227-1019.

Darryl Eugene Smith, age 50, of Durham, N.C. passed away peacefully on Tuesday, July 3, 2018, after a lifelong battle with sickle cell disease. Darryl was born in Munich, Germany on February 23, 1968 to Gene and Ruth Ann Smith. After his... View Obituary & Service Information

The family of Mr. Darryl Eugene Smith created this Life Tributes page to make it easy to share your memories.