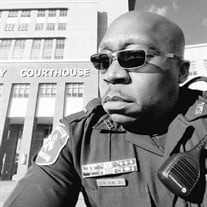 It is with saddened hearts and complete faith in God’s divine plan, that we announce the transition of our beloved David Whitfield Buie, Jr. David Whitfield. Buie, Jr. lives. He lives in everyone that was on the receiving end of that big, wide, “McCright, gap in the middle, smile”. David lives in everyone who has ever been in his big bear embrace. David lives in anyone who was ever picked on lovingly, or teased mercilessly, using his silly, wink-wink humor. That’s how he let you know he was paying attention, how he let you know he really knew you, saw you, and loved you intensely, sometimes in spite of what he saw. Dave lives in every friend he ever helped out, every auntie he stopped by to see, every cousin he hugged, and every niece or nephew he ever gave refuge from a too-strict parent. David Jr. lives in every older sibling who changed his diapers, gave him a bath, taught him how to hold his dukes up, helped him with his homework , comforted him and, (requested or not) advised him, because he was the baby. David Jr. was the youngest; and with that status, you just get big love automatically. Dave lives in and with all of us. David especially lives on in his children--his bonus daughter, Aquila, and his son, Tre’, David Whitfield Buie, III. When a man defies his father and follows his heart to marry the woman he loves, Stephanie, and take on the responsibility of raising a daughter, whom he loved tremendously, it speaks to his strength of character and determination to be his own man. Aquilah’s children, A’kil, Madysen and Avah gave David the treasured title of “Grandaddy”. David passed this strength and determination to his son, Tre’. Tre’s kindness and deep love for his friends and family is a testament to David. His big smile, big hugs, and big heart are his father’s legacy. His compassion and acceptance of all who cross his path is a mark of the beautiful character inherited from his father. Dave was born to Mr. David W. Buie, Sr. and Evangelist Hattie Mae McCright Buie on September 20, 1964. He was the 7th of the union between Hattie and David. David was a funny and kind little boy. His primary years were spent at C C Spaulding School where he was a Safety Patrol. Other boyhood activities included Cub scouts, Boy scouts, and participation in Mt. Calvary Holy Chruch’s children’s choir, The Little Voices. David’s educational foundation continued in true Durham South Side fashion by attending Rogers-Herr Junior High School and finally graduating from Hillside High School where he was a member of the Choir, the Drama Club and on the football team. High school weekends were spent at Wheels Skating Rink where he was one of the best on eight wheels. Upon graduation, David attended Durham Technical College and eventually took a position with the Campus Police of North Carolina Central University. This is where David’s career with law enforcement took off. After graduating from Durham County Sheriff’s Police Academy, he continued to be a prominent presence on the NCCU police force serving as an Officer, Sergeant, Lieutenant, and Arms Instructor. Within a span of a 30 year career at the University, he earned endless certifications, and commendations exemplifying his commitment training, excellence and service. Among Sergeant Buie’s career highlights, being the official driver for two North Carolina Central University's Chancellors and receiving the North Carolina Governor’s Award were at the top. But, what he valued most was the family of brothers and sisters he acquired as a police officer. What he enjoyed most was grilling, feeding and sharing inside jokes and experiences with that family of officers over at 1405 S. Roxboro. But more than that, what he loved doing most was mentoring officers and serving his community with respect, humility, love, and laughter. So, after 30 years at NCCU, Dave retired, but not for long. He wrote; “After thirty years in Law Enforcement, I still felt young, and able to serve; I just wanted to continue to serve our community and mentor younger officers.” This is exactly what he did. David joined the Durham County Sheriff's Department and expanded his family of officers and community by working in the courthouse. “You have to treat people with respect” he would say. Dave, David Jr., Uncle David, did not spend all of his time in uniform. His downtime was spent at concerts, grilling, eating out, and traveling. Among his favorite getaways was the annual MEN’S TRIP. He and a group of his closest and best friends would get away for male bonding, laughs, good food, good drinks and big fun. That time meant so much to him. David’s body succumbed to the complications brought on by a rare blood cancer, Erdheim-Chester, on September 5, 2020. But his spirit will live always in our hearts, spirits, and memories of how he made us feel loved. David is survived by his son, David W. Buie, III, a daughter, Aquila Moore, (Stephanie Buie), A brother Anthony “Pete” Whitfield Buie, Three sisters; Brenda Buie Burnette, Celestine Buie, and Donna “Koku” Buie, three grandchildren, A’qil, Madison, and Avah, 14 adoring nieces and nephews: Leslie Buie-Baber, (Brandon), James Buie, Albert Burnice Burnette, Trina Richard, (Dwayne), Rhonda Arrington Bey, Donja Mercer, (Donta), Aaron Burnette, Solomon Burnette, Bridget Rogers, Bianca Arrington, Jena Drummond, (Christopher) Amber Harris, Lucinda Harris, Elisha Harris, Blessid NiaYemi, his family of officers in law enforcement and a host of other relatives and friends. A graveside service of celebration has been scheduled for Saturday, September 12, 2020, at 11:00 a.m. at Beechwood Cemetery, 3300 Fayetteville Street, Durham, NC, 27707. In every effort to protect our families and their guests, face coverings are required.

It is with saddened hearts and complete faith in God&#8217;s divine plan, that we announce the transition of our beloved David Whitfield Buie, Jr. David Whitfield. Buie, Jr. lives. He lives in everyone that was on the receiving end of that... View Obituary & Service Information

The family of Mr. David W. Buie, Jr. created this Life Tributes page to make it easy to share your memories.

It is with saddened hearts and complete faith in God’s divine...

Send flowers to the Buie, family.