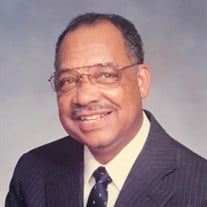 The family of Dr. David McNair, age 92, wishes to announce his passing, which occurred on Monday, April 18, 2022. Dr. David McNair, the third child born to Lacy Leroy McNair and Arletha Adam McNair, began his earthly journey on March 7, 1930, in Red Springs, North Carolina. David was reared on the family farm in Robeson County, along with his siblings, Berneatha (Newt), Lacy Leroy, Jr. (June), Jonathan (Buddy) (all deceased), and Lela (Sister). He later became a member of St. James AME Church, Red Springs, North Carolina. At an early age he met his future wife, Betty Rouse. He and Betty were married in 1954. To this union, George David McNair was born, the first of three sons. He enlisted in the army during the Korean War and became a corporal, working in the 101st Airborne Division’s bookkeeping department based in Hanau, Germany. After leaving the army, David was again educated in the Robeson County School system and graduated from Peterson Negro High School, Class of 1953. He next attended Fayetteville State University where he became an honor student. While there he also joined Phi Beta Sigma Fraternity and became the secretary for the chapter. He graduated earning his Bachelor of Arts degree in Education in 1957. He later attended Columbia University in New York City where he earned a Master of Arts degree in Education in 1969. David’s inaugural teaching assignment was at R.B. Dean in Maxton, North Carolina. He taught Math. He continued teaching at R.B. Dean School until 1970. At that juncture, he was hired by St. Andrews Presbyterian College as the Assistant Dean of Students in Laurinburg, North Carolina. In 1977, he took a sabbatical to pursue his Doctorate at the University of North Carolina in Chapel Hill. He graduated in 1980. David was an avid supporter of Fayetteville State University and its Alumni Association and later became the President of the Durham, NC chapter. He also had a lifelong devotion to student counseling. He became an honored member of the American Psychological Association in 1996. Dr. David McNair is survived by his wife Betty; sons George David, Timothy Wingate and Hiram Francis. His life is also celebrated by members of his beloved fraternity, Phi Beta Sigma, members of his hunting club and fishing partners, numerous nieces and nephews, extended kin and cherished friends. Homegoing services to honor the life and legacy of Dr. David McNair are as follows. Visitation, Friday, April 29, 2022, from 12:00 p.m. - 12:55 p.m., with the Celebration of Life Service beginning at 1:00 p.m., at St. Joseph AME Church, 2521 Fayetteville Street, Durham, North Carolina 27707. Phi Beta Sigma Fraternity, Inc. will honor Dr. David McNair with a ceremony at 12:30 p.m., half an hour prior to the Celebration of Life Service at St. Joseph AME Church. Please keep this family in your thoughts and in your prayers.

The family of Dr. David McNair created this Life Tributes page to make it easy to share your memories.

The family of Dr. David McNair, age 92, wishes to announce his...

Send flowers to the McNair family.