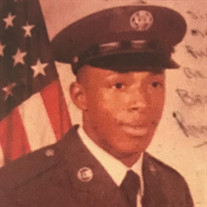 Donald Edward Poinsett (Randy) was born October 21, 1952 in Durham, N.C. to Vera Poinsett Brown. He was the older of the two children; he departed this life on Tuesday, December 4, 2018 at Baystate Medical Center in Springfield, M.A. He went home to join his mother Vera P. Brown, his grandmother Laura, his granddaddy Charles, and his uncle Frank Poinsett. After completing school he entered the United States Air Force. After completing his tour of duty he received an honorable discharge in January 1976. Donald was blessed with one of the greatest gifts of art. As a child, he was a member of the John Avery Boys Club. He had his own shoe shine stand on Main Street in downtown Durham. Donald was a kindhearted individual who did whatever he could to help others. He had a deep love for family and animals (his cat Nero), and a great sense of humor. Donald was also able to travel around the world......these are just a few. Donald was reared in a home with a strong Christian foundation. It was that foundation that led him back to Christ in his later years. Donald is survived by his only sister, Sylvia Chestnut (Alfred Chestnut), his two nieces, Angela and Latosha, great nephews and a great niece who call him Uncle Randy: Kyhir, Kadin, Gabby and Bryson, a beloved cousin, Edna and her daughter, Ariel, and Zenobia Cora, his honorable daughter. He also leaves behind his special friends: Veronica, John, Lisa, Morgan, and Laurette, and a host of cousins and friends. Funeral services will take place on Saturday, December 22, 2018 at 1:00 p.m. at Greater Clegg's Chapel Community Missionary Baptist Church, 2601 Surl Mount Tirzah Rd, Timberlake, N.C. 27583, with a family visitation one hour prior to the service.

Donald Edward Poinsett (Randy) was born October 21, 1952 in Durham, N.C. to Vera Poinsett Brown. He was the older of the two children; he departed this life on Tuesday, December 4, 2018 at Baystate Medical Center in Springfield, M.A. He went... View Obituary & Service Information

The family of Mr. Donald Edward Poinsett created this Life Tributes page to make it easy to share your memories.

Send flowers to the Poinsett family.