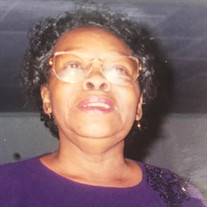 It is with great sadness that the family of Dorothy Moore announces her passing on Wednesday, March 20, 2019, at the age of 84 years at her home, 209 W Enterprise Street, Durham, North Carolina 27707. On January 28, 1935, Dorothy was born... View Obituary & Service Information

The family of Mrs. Dorothy Moore created this Life Tributes page to make it easy to share your memories.

It is with great sadness that the family of Dorothy Moore announces...

Send flowers to the Moore family.