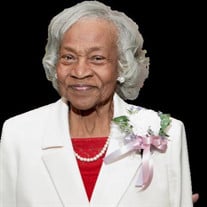 Yes, I'm 101 years old-Wow! I can't believe it! Once, I was a little baby, born in South Boston, Virginia whose parents were the late Dr. James M. Mason and Mrs. Edwina Wilson Mason. My mother, passed right after birth of her second child (my only sibling)-Doris M. Gomez whose life sadly ended October 13, 2015 in Union Springs, Alabama. In 1926, my father married Edna B. Jones of Pittsburg, PA and we were truly blessed by this union. She was a wonderful mother to Doris and me; she devoted her life to us and cared for us in extraordinary loving ways. I received my elementary education in the South Boston, Virginia local public schools and in 1935 I graduated from Palmer Memorial Institute, Sedalia, North Carolina. 1940 was a very busy year for me, I graduated from North Carolina College where I received a B.S.C. Degree (Bachelor of Science in Commerce), I became a proud member of Delta Sigma Theta Sorority, Alpha Lambda Chapter and after graduation, I began my career on September 21st at North Carolina Mutual Life Insurance Company as a clerk in the Statistical Division of the Actuarial Department. In 1941, I became a charter member of Alpha Kappa Sigma Chapter of Delta Sigma Theta Sorority, Inc. which later became Durham Alumnae Chapter, Delta Sigma Theta Sorority, Inc. I have been a Delta for 81 glorious years. After working for 40 years, I retired on November 30, 1981 from North Carolina Mutual Life Insurance Company as the Manager of the Claims Division. In 1990, I was inducted into the society of Golden Eagles and I have attended all but two of the annual homecoming luncheons since becoming a member. I have been retired for 40 years and I have enjoyed every one of them. Being retired allowed me to travel extensively throughout the United States and Europe, I spent my early retirement years volunteering with Call for Action, Meals on Wheels, Den Leader-Cub Pack at White Rock Baptist Church, Board Member of Scarborough Nursery School, member of National Council of Negro Women and Year-Round Garden Club. As time progressed, I realized that I would have to scale back on some of my activities, however being a member of the Year-Round Garden Club has been one of my most treasured organizations. The monthly meetings at each other's homes are always a delight and once I no longer was able to drive someone mostly my Soror and fellow garden club member, Jacqueline Jones always made sure someone would pick me up. Oh, what a beautiful life I have lived! I must thank my creator-the Great master of the universe. I have LOVED God all the days of my life and I did my best to honor and serve. I formerly attended White Rock Baptist Church until I became one of the founding members of Beacon Light Missionary Baptist Church where I served as a Trustee and sang in the Senior Choir. *************** To know Edna was to love her dedicated life; in church, community, and civic affairs. She was the epitome of a Lady, and befriended all who found the need of her services. As she "Cometh unto the Father" she is survived by her extended family her surrogate brother-in-law Mr. Leroy Brown, her beloved niece, Ms. Cheryl Brown, her great nephews, Kyle and Max Jeffers and her great-great nephew Kasey Jeffers, all of Durham, North Carolina, a host of cousins and a legion of other friends and associates. A graveside funeral ceremony to honor the life of Miss Edna M. Mason will be held on Friday, April 16, 2021, at 1:00 p.m., at Beechwood Cemetery, 3300 Fayetteville Street, Durham, North Carolina 27707. In every effort to protect our families and their guests, face coverings are required.

Yes, I'm 101 years old-Wow! I can't believe it! Once, I was a little baby, born in South Boston, Virginia whose parents were the late Dr. James M. Mason and Mrs. Edwina Wilson Mason. My mother, passed right after birth of her second child... View Obituary & Service Information

The family of Miss Edna M. Mason created this Life Tributes page to make it easy to share your memories.

Send flowers to the Mason family.