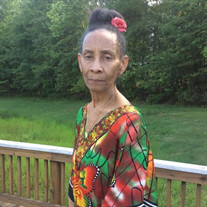 Elaine Jones, the daughter of the late Murdella Castina Keene and Wilfred Charles Keene, was born on July 4, 1945, in Kingston, Jamaica. She passed away peacefully on Monday, August 13, 2018, at the Hock Family Pavilion in Durham. Elaine was a woman with a heart of gold. She had such a gentle spirit and she was always willing to lend a helping hand. Elaine was a wife, mother, daughter, sister, grandmother, aunt, educator, and friend. With an affection for the great outdoors, Elaine was always seen taking a walk or in her garden. She had a gift of a magical green thumb, which somehow skipped her daughters. Elaine moved to the United States in May of 1971, when she was 26 years old. She worked as a nanny to a family in Far Rockaway, N.Y. before moving to Brooklyn, N.Y.. On June 17, 1978, she was united in holy matrimony to the late Paul C. Jones, Jr. Elaine worked primarily with infant to five year old children between the years of 1971-2013. During her time, Elaine worked at Scarborough Nursery School, and Steps and Ladders Daycare, both of Durham. Elaine truly lived life to the fullest through simple pleasures. She enjoyed cooking her native food for her family, reading her favorite magazines while drinking a cup of coffee, and dancing to the hits of Michael Jackson. Elaine had an infectious spirit about her. She loved telling stories of her childhood in Jamaica. She had an uncanny ability to reach people in a deep and positive way. She leaves to cherish her memories, two children, Cristina and Jennifer Jones, both of Durham, one granddaughter, Aaryanna Henry, of Durham, four sisters, three brothers, and a host of nieces, nephews, cousins, and other relatives and friends.

Elaine Jones, the daughter of the late Murdella Castina Keene and Wilfred Charles Keene, was born on July 4, 1945, in Kingston, Jamaica. She passed away peacefully on Monday, August 13, 2018, at the Hock Family Pavilion in Durham. Elaine... View Obituary & Service Information

The family of Mrs. Elaine Jones created this Life Tributes page to make it easy to share your memories.

Elaine Jones, the daughter of the late Murdella Castina Keene...

Send flowers to the Jones family.