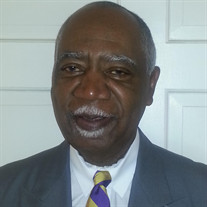 Ellis Henderson Smith was born on September 4, 1939, the third of eight sons, to the late William and Bessie Smith. At his home, he very peacefully departed this earthly life on Saturday, February 15, 2020. Ellis was educated by Durham Public Schools and graduated from Hillside High School in 1957. He furthered his education and graduated from North Carolina College, which later became North Carolina Central University, in 1961 with a Bachelor’s Degree in Art. Ellis returned for his Masters in Education Media and completed that degree in 1964. He started his career as the Art teacher at Whitted Junior High School in Durham, then moved to Mercer County Community College until the family relocated to Levittown, Pennsylvania. Later in his career, Ellis was Assistant to the Chancellor at Elizabeth City State University from 1973 until 1985. Ellis then served his alma mater, North Carolina Central University, in various leadership roles and finished his career as Director of Alumni Affairs. While in that role, he founded the Society of the Golden Eagles including their pledge and continued to be an avid supporter of NCCU in his retirement. Ellis was initiated into Omega Psi Phi Fraternity, Incorporated, Tau Psi Chapter on the campus of North Carolina College in 1958. Upon his graduation, he faithfully served Omega Psi Phi in various graduate chapters. However, he considered the Beta Phi Chapter his home, where he was honored as "Man of the Year" on numerous occasions and awarded his 50 Year Pin in 2008. Ellis enjoyed hosting family and friends for gatherings, tailgates and bus trips for NCCU sporting events, hunting, fishing and bowling. While at North Carolina College, Ellis met his soulmate Enid. They married and raised five children. Ellis is preceded in death by his three sons, Ellis II, Kenneth and Todd; as well as his brother Walter. Ellis is survived by Enid, his loving and devoted wife of 56 years; two daughters, Nicole and Trecia; his grandchildren, Sable, William Ellis and Lillian; his brothers, William (Marie), Herbert, Theodore (Betty), Ira Q.(Esther), Lenox and Sylvester; as well as three Sisters In Law, Rosa Overby, Annette Nixon, Barbara Smith(Walter); and an abundance of extended family and friends. A Service of Celebration has been scheduled for Friday, February 21, 2020, at First Calvary Baptist Church, 1311 Morehead Ave., Durham, North Carolina 27707. The family will assemble for a visitation from 11:00 a.m. to 12:00 noon, followed by the celebration service, at 12:00 respectively, with Pastor Fredrick A. Davis delivering the eulogy. There will also be an Omega ceremony at 11:30 a.m., prior to the service. In lieu of flowers, please consider a gift to the North Carolina Central University Foundation Incorporated, in memory of Ellis H. Smith. Gifts will be designated to the Society of Golden Eagles Scholarship Fund. Send gifts to the NCCU Foundation, PO Box 19363, Durham, NC 27707 or online http://everyeagleeveryyear.org/

Ellis Henderson Smith was born on September 4, 1939, the third of eight sons, to the late William and Bessie Smith. At his home, he very peacefully departed this earthly life on Saturday, February 15, 2020. Ellis was educated by Durham Public... View Obituary & Service Information

The family of Mr. Ellis Henderson Smith created this Life Tributes page to make it easy to share your memories.