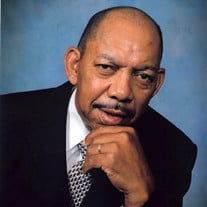 Elvis Lewis, Jr., age 77, of Durham, NC passed away at Duke Regional Hospital Monday morning, August 2, 2021. He was born June 19, 1944 in Henderson, NC to the late Elvis Lewis, Sr. and the late Dorothy Jefferson Lewis McArthur. Growing up in Vance County, he attended Henderson Institute, where he was an honor student who also excelled in track and baseball. He won the state typing championship as a senior in high school, and was awarded a full scholarship to North Carolina Central University (NCCU) in Durham, NC. From NCCU he received a Bachelor of Science in Business Administration, with honors, and a Juris Doctorate. He graduated at the top of his law school class. While at NCCU, in the fall of 1964, he was inducted into the Tau Psi chapter of Omega Psi Phi Fraternity, Inc. He was a proud member of the NCCU Eagles Club and the Society of Golden Eagles. He began his legal career in 1968 as Assistant Regional Attorney for the Department of Health, Education and Welfare in Charlottesville, VA. He was drafted into the United States Army in May 1969 and was soon commissioned as a Captain in the Judge Advocate General Corps. In this capacity, he served as Defense Counsel and as a Prosecutor. In 1971, he moved with his wife and son to Kaiserslautern, Germany, where he served as one of the first Black judges in an overseas branch of the United States Army. In recognition of his military service, he received a National Defense Service Medal and an Army Commendation Medal. Following his honorable discharge from the armed services, he established private law practices in Danville, VA and Fayetteville, NC, where he also served as Chairman of the Housing Authority. Being a lover of the outdoors, he was happiest hunting deer, fishing for bass, or golfing. If he couldn’t find his match in the woods or on the golf course, he often settled for the prey across the card table during highly competitive spades and bid whist games with friends and family. Those who knew him will always remember him as a captivating wit and master storyteller, and as someone who never met a stranger in his life. He is survived by his wife of 53 years Claudine Daye Lewis; two sons, Elvis Lewis, III of Durham, NC and Kevin J. Lewis (Chaundra) of Atlanta, GA; three grandchildren (Kennedy, Lauryn, and Chandler); his sisters Annie Beidleman of Mount Vernon, NY and Edith Bazemore (Bill) of Fort Washington, MD; a niece and nephew; three great nieces and two great nephews; and a host of cousins and friends whom he loved dearly. He was a member of Union Baptist Church in Durham, NC. A public viewing will be held from 2:00 p.m. until 6:00 p.m. on Monday, August 9, 2021, at Scarborough & Hargett Celebration of Life Center, Inc., 309 N Queen Street, Durham, NC 27701. Private family services will be held Tuesday, August 10, 2021, at 11:00 a.m. To view the Celebration of Life Service for Mr. Elvis Lewis, Jr. through Zoom Live Stream: Please click the link below to join the webinar, https://us02web.zoom.us/j/84415539551? Webinar ID: 844 1553 9551 Passcode: 153598 Interment will follow in Glennview Memorial Park. In lieu of flowers, please donate in memory of Elvis Lewis, Jr. to: NCCU.edu/Giving - NCCU Class of 1966 Endowed Scholarship Fund, or - Tau Psi Endowment *In the comments field, enter "In memory of Elvis Lewis, Jr."

The family of Mr. Elvis Lewis, Jr. created this Life Tributes page to make it easy to share your memories.

Customized sympathy cards. Mailed for you.