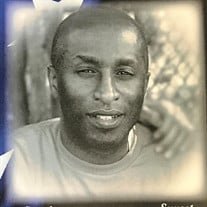 Mr. Erick Wayne Grissom, age 57, departed his earthly walk on May 29, 2021, at the Durham VA Medical Center. Erick Wayne Grissom was born on August 7, 1963, in Durham, North Carolina at Lincoln Hospital. Erick was the first of two children born to Barbara Sanchious Bayne and John Ed Grissom. He was a man of integrity and honor, a man of unshakable conviction, and a man with extraordinary gifts and talents. When Erick was 4 years old, he and his family moved to East Orange, New Jersey. He attended Washington Elementary School (East Orange, NJ), Trinity Temple Academy (Hillside, NJ), and St. Benedict’s Preparatory High School (Newark, NJ) where he graduated in 1981. Erick never had to find himself. His talents and life vision emerged very early in his childhood. In grade school, Erick was obsessed with technology. He never encountered a TV, watch, radio, or household appliance that he did not try to dismantle. Early on, Erick developed a strong interest in aviation. He and his late Uncle Dan Brown spent countless hours watching and analyzing flights at Newark Airport. Finally, while in high school, Erick fell in love with House music. If there was a house party, neighborhood cookout or family function, Erick was the DJ. Erick’s passion for music, technology, and aviation would ultimately define how he lived his life. Soon after high school, Erick enlisted in the United States Army where he pursued his love of aviation. Erick became an apache helicopter mechanic, a Federal Aviation Administration (FAA) certified pilot and a flight instructor. He also flew commercially part-time for Alaska Air, all while maintaining his military duties. During his service, Erick enjoyed seeing the world during stints at Fort Stewart, GA; Fort Lewis, WA; Wheeler Army Airfield, HI; Fort Eustis, VA; and Seoul, South Korea. While enlisted, Erick served as: Aviation Armament Specialist and Platoon Sergeant. At retirement, he had achieved the rank of E8/First Sergeant and he earned citations for: Meritorious Service Medal, Army Commendation Medal, Army Achievement Medal, Army Good Conduct Medal, National Defense Service Medal, Korea Defense Service Medal, Non-commissioned Officer’s Professional Development Ribbon with Numeral 3, Army and Overseas Service Ribbons. After Erick’s Army retirement, he moved to North Carolina and turned to his love of technology and music. He became an independent IT Professional and Web Design Instructor with stints at Cisco Systems, and the University of North Carolina. He supported many local attorney’s offices and accounting firms as a 1-man Geek Squad. During retirement, Erick also discovered cycling and became a part-time Spin Instructor. As a Spin Instructor, he took this physical fitness platform to the next level. Erick combined this new passion for cycling with his Army leadership skills and his lifelong love of music to create a life-changing cycling and physical fitness experience. His spin classes were nothing short of transformative. He had a music library of almost 7,000 songs. Above all else, Erick was a family man. He was the family’s go-to person for almost anything and everything. He was literally a human Google search engine. The family lovingly called him “Mr. Fix It.” And while Erick had many callings in his lifetime, his greatest love and passion were his two children. As a single dad with physical custody, he was fanatical about fatherhood. Erick was a force of nature when it came to his children. Their day started at 5 am, when he required them to run 3 miles. After school, he required one hour of reading and one hour of typing. Moreover, every single second of each day was scripted with a several page checklist. Each child received a score at the end of the week and privileges were doled out accordingly. And although Erick was the type of dad to take bedroom doors off the hinges and remove them from the house if necessary, he spent thousands of hours supporting, nurturing and encouraging his children. Erick was committed to ensuring that Quentin and Camryn would have the foundation and discipline to realize their God given talents and to also be of service to others. Erick’s legacy of excellence in all that he pursued will live on through his children. Erick departed this life on May 29, 2021 at the Durham VA Medical Center with his family by his side as a result of a rare form of cancer. In 2003, he was predeceased by his father, John Ed Grissom of Atlanta, GA. He is survived by: His Children: Quentin Grissom (Fayetteville, NC) and Camryn Grissom (Durham, NC); His Mother: Dr. Barbara Sanchious Bayne, PhD (Trenton, NJ) and Stepmother Esther Grissom (Atlanta, GA); His Sisters: Beverlyn Grissom, Esq. (Trenton, NJ) and Sheila Jackson (Vauxhall, NJ); His Niece/Nephews: Tunisia Lipford (Piscataway, NJ), Eric Jackson (Vauxhall, NJ), and Trey Brown (Columbia, SC); His Cousin-Siblings: David Williamson (Atlanta, GA), Robinette Ward (Somerset, NJ), Anthony (Denise) Brown (Columbia, SC), Marice Grissom (Charles) Freeman (Morrisville, NC), and Leonard Satterwhite (Lexington, VA); His Aunts: Florine Grissom Brown (East Orange, NJ), Betty Grissom Ward (Somerset, NJ), Beverlyn Sanchious (William) Holloway (Inglewood, CA), and Eva Williamson (Dayton, OH); His Uncles: Willie (Mary) Grissom (Winston-Salem, NC) and Calvin Sanchious (Miami, FL); His Cousins: Earley Jerome (Erica) Terry, Jr. (Pasadena, CA), Kenneth Terry (Los Angeles, CA), West Sanchious (Baltimore, MD), and Damon Sanchious (Las Vegas, NV); Michelle Grissom (mother of Quentin and Camryn) and countless other family members, colleagues, and friends. Mr. Erick Wayne Grissom served our country in the United States Army. We honor him for his service and dedication. A memorial service of celebration to honor the life of Erick has been scheduled for Sunday, June 6, 2021, at 1:00 p.m., at Rock Spring Baptist Church, 3180 Bruce Garner Road, Creedmoor, North Carolina 27522.

The family of Mr. Erick Wayne Grissom created this Life Tributes page to make it easy to share your memories.

Send flowers to the Grissom family.