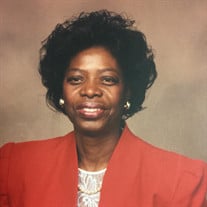 IN LOVING MEMORY OF ERMA GRACE SUGGS-SMITH February 3, 1944 – March 14, 2017 Erma Grace Suggs-Smith was born February 3, 1944 in Greene County. She departed this life on Tuesday, March 14, 2017 in Durham, North Carolina.She was educated in Wayne County public schools and graduated from Norwayne High School in Fremont, North Carolina. As a young woman, Erma worked for Westinghouse Electric Corporation in Newark, New Jersey and the East Orange Board of Education. She selflessly relocated to North Carolina to care for her aging parents, James William and Elleather Johnson Suggs, who preceded her in death. She married her long-time love, James, on May 7, 1993. After relocating to North Carolina, she began working at Durham Public Schools and retired in May 2006.She was a member of Fisher Memorial United Holy Church of America in Durham, where she was baptized. Erma was a loving wife, sister, aunt and friend who will be missed dearly.She is survived by her husband, James E. Smith; one step-son, Martin J. Smith (Candice) of Hollywood, California; one sister, Verlene Beasley of Charlotte, North Carolina; one brother, Henry L. Suggs of Wilson, North Carolina; three nieces Valerie Y. Morgan (Donell) of Virginia Beach, Virginia; Vanessa Suggs Wallace of Union, New Jersey; and Vickie L. Suggs-Jones (Gregory) of Raleigh, North Carolina; one nephew Warren D. Best (Anita) of Charlotte, North Carolina; one great-niece Max Grace of Raleigh, North Carolina; one step-grandson (Jaden) of Hollywood, California; best friend of 56 years, Joanne Malone (Jimmy) of Chesterfield, Virginia; and a host of loving cousins, relatives and friends.Erma’s home going service will be held Tuesday, March 21, 2017, at Fisher Memorial United Holy Church of America, 420 E Piedmont Ave, Durham, NC 27707. Visitation will be from 11:00 a.m. to 11:45 a.m., service will begin at 12:00 p.m. and the interment will be at Glennview Cemetery, located at the intersection of NC Highway 55 and Riddle Road, Durham NC immediately following the service. The repast will then be held in the Fellowship Hall.But according to his promise we are waiting for new heavens and a new earth in which righteousness dwells. [2 Peter3:13 NASB] A special note of thanks to the staff at Liberty Home Care and Hospice & Eno Pointe Assisted Living for the continued care of our loved one, especially Ms. Tracy Moore.

The family of Mrs. Erma Grace Suggs-Smith created this Life Tributes page to make it easy to share your memories.

Send flowers to the Suggs-Smith family.