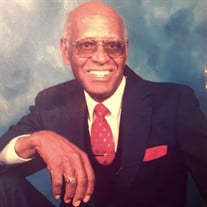 Rev. Everett Wallace Johnson, Sr., age 94, son of the late Jural Johnson and Eula McMannen Johnson was born on May 24, 1924, and departed this life on Friday, December 28, 2018 at his home surrounded by his family. He was preceded in death by his eleven siblings; one grandson and one great grandson. He was born and reared in Durham County. Rev. Johnson was educated in the Public Schools of Durham County. During his younger years, he served his country in the United States Army during World War II (1943-44). He received his Diploma of Theology from the P. E. Green Bible Institute in Durham, N.C. In 1975, he received certification in Pastoral Care and Counseling from Duke University. He served faithfully as pastor of the Harris Grove Missionary Baptist Church in Siler City, N.C. for over 23 years. Rev. Johnson pastored Mount Olive Baptist Church in Moncure, N.C.; and served faithfully as an associate pastor of the Morehead Avenue Baptist Church in Durham, N.C., and was honored as Man of the Year in March 1992 by this church. He also served as the interim pastor of New Red Mountain Missionary Baptist Church, Rougemont, N.C. (1998-1998), and served faithfully until his health declined. Civically and religiously, Rev. Johnson has served the Durham County Community in various capacities. He was the past moderator of the Deep River Union of Chatham County. He served on the Ordained Council of the Deep River Association, the National Association of the Community Health Center of Washington, D.C.; former president of the Board of the Lincoln Community Health Center, chairman of the Rougemont/Bahama Board of the Lincoln Community Health Center; member and past chaplain of Red Mountain Lodge 468; member and past patron of Shenandoah Chapter 661 Order of the Eastern Star; member and patron of the 10th District Administrative Council Order of the Eastern Star; and member of Durham Branch of the National Association of the Advancement of Colored People. Rev. Everett W. Johnson, Sr. was united in Holy Matrimony to the late Hermalene P. Johnson in 1945. To this union six children were born. As a dedicated father, grandfather, and great grandfather, he always put God first. He leaves to cherish his memories: a devoted wife of 31 years, Yvonne W. Johnson; one son, Rev. Everette W. Johnson, Jr. (Dorothy) of Bahama, N.C.; five daughters, Carolyn J. Cates, Edna J. Kennedy (Ewell, Jr.) of Bahama, N.C., Joyce J. Gattis, Sharon J. Farrow (Ronnie, Sr.) and Aretha J. Herron of Durham, N.C.; one stepson, Bernard Love (Anja) of Durham, N.C.; three sisters-in-law; two brothers-in-law; 19 grandchildren; 27 great grandchildren; a special family friend, Jessie White, Jr.; and a host of other relatives and friends. Reverend Johnson's goal in life was to serve the Lord through his ministering to others. He was a "friend" who loved his fellow man, and served God's Kingdom to the end. Rev. Johnson's message in life is epitomized in his favorite scripture - Psalm 27:1-14. On Friday, January 4, 2019, a visitation will be held at Morehead Avenue Baptist Church, 1008 Morehead Avenue, Durham, North Carolina 27707, from 6:00 p.m. until 7:30 p.m. Funeral services will continue on Saturday, January 5, 2019, at New Red Mountain Missionary Baptist Church, 1401 Red Mountain Road, Rougemont, North Carolina 27572, at 1:00 p.m., with a family visitation one hour prior to the service.

Rev. Everett Wallace Johnson, Sr., age 94, son of the late Jural Johnson and Eula McMannen Johnson was born on May 24, 1924, and departed this life on Friday, December 28, 2018 at his home surrounded by his family. He was preceded in death... View Obituary & Service Information

The family of Rev. Everett Wallace Johnson, Sr. created this Life Tributes page to make it easy to share your memories.

Send flowers to the Johnson, family.