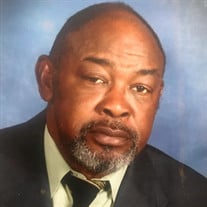 It is with great sadness that the family of Frank Jacobs, Jr. announces his passing on Thursday, March 14, 2019, at the age of 72 years. Frank Jacobs, Jr. was the oldest son of the late Frank Jacobs, Sr. and Queenie Mae Branch Jacobs, who both preceded him in death, along with his brothers, Ervin and Daniel, and his sister, Queen Esther. Frank was born August 18, 1946 in Durham, North Carolina. He was born and raised on the West End and attended Durham City Schools. He was a proud graduate of Hillside High School. As he furthered his education, Frank attended North Carolina Central University, Durham Tech, RECTS Electronic College, and received his electrical Certification in the United States Air Force. Frank enlisted in the Air Force in 1967 and was honorably discharged in 1971. Frank became a member of First Calvary Baptist Church at a young age. He served on the Usher Board and served as the Chairperson of the Recreation Ministry, a role he took pride in and served in for a number of years. Athlete: Frank Jacobs, Jr. LOVED SPORTS! He played basketball, tennis and ran track at Hillside High School; football, basketball, and baseball in the United States Air Force; bowled in many leagues in the Durham-Orange-Person USBC, Capital Area USBC, and competitively on a National level. He also CLAIMED to be the champ at ping pong, horseshoes, pool and any other sports. Also, according to family members, Frank loved antique cars. Brick Mason: Frank mastered the art of Brick Masonry from his father, Frank Jacobs, Sr. He established Jacobs Masonry Enterprises, Inc. and worked the remainder of his life as a highly skilled Brick Mason in this specialized field. Frank took extreme pride in his craft and taught others to do the same. He built and/or assisted in building many homes and businesses in the Durham, Apex, Cary, Raleigh, Morrisville, and Chapel Hill areas among others. As you ride around Durham, you have passed or entered buildings that Frank Jacobs, Jr. was contracted to build from the ground up or worked on to enhance such as the cafe' area at the Durham VA, Dorcas Masonic Lodge, sections of the Durham Bulls Stadium, various buildings on Duke University's Campus, and Jiffy Lube, to name a few. Champion: Every team Frank Jacobs, Jr. coached was coached as if they were all already champions. He expected the best, trained them for life, and coached them as a champion to be champions. He was extremely proud and excited that he had the opportunity to coach his grand children and see both his great grandsons win championship basketball games this year. He was able to coach with his cousin, Bob, and his nephew, the son of his brother, Eugene, Frankey Jacobs. He was actively coaching and preparing for the next season with the Long Ball Inner City Baseball Program. Leader: Frank led by example, he had his own unique way of coaching and teaching life lessons through guidance and direction on the court, field, at home, or job site. He believed in and worked to support and serve the community in various ways, his impact was great. Frank was an original board member of Calvary Ministries of the West End Community, Inc., now The West End Community Foundation, Inc. Encourager: Frank was a humble man, who didn't speak of things he was led to do for others. He was generous, compassionate, caring, and worked tirelessly to ensure those around him learned the value of hard work, dedication to purpose, and pursuing their passions. He wanted people to realize their potential and succeed. Frank Jacobs, Jr. was affectionately known as 'Jake' by many, 'Jun' by family, 'Coach Jacobs', 'Coach Frank', 'Generator Jake' by his Air Force teammates, 'Boss Man' by his brick mason friends and employees. Frank's loving and lasting memories will be forever cherished by his wife for over 50 years, Maggie Lee Walker Jacobs; two daughters, Evelyn Hammiel and Yolanda D. McMillian of Durham, NC, and Sharon Jacobs of Greensboro, NC; two sons, Aaron Jocobs and Seon Glenn of Durham, NC, brother, Eugene Jacobs (Linda) of Winston Salem, NC; sisters-in-law, Gracie McKinney of the home and Dorothy (Dot) Grant of Miami, FL; grandchildren, Valerie Medlin (Kendrick, Sr.), Sasha Hammiel, Jaymie Hammiel, James Hammiel, and Laya Jacobs; great grandchildren, Kendrick Medlin, Jr., Keven Medlin, Jordyn Medlin, and Neena Williams; and a host of beloved nieces, nephews, very dear cousins, and other relatives as well as treasured friends and many that called him "Coach!" Funeral services will take place on Thursday, March 21, 2019, at First Calvary Baptist Church, 1311 Morehead Ave., Durham, North Carolina, 27707, at 12:00 noon, with a family visitation one hour prior to the service. In lieu of flowers, contributions may be sent to: Long Ball Youth League and The West End Community Foundation, Inc.

It is with great sadness that the family of Frank Jacobs, Jr. announces his passing on Thursday, March 14, 2019, at the age of 72 years. Frank Jacobs, Jr. was the oldest son of the late Frank Jacobs, Sr. and Queenie Mae Branch Jacobs, who... View Obituary & Service Information

The family of Mr. Frank Jacobs, Jr. created this Life Tributes page to make it easy to share your memories.

It is with great sadness that the family of Frank Jacobs, Jr....