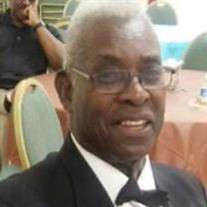 Mr. Frederick K. Ruffin, Sr. was born to the late Benjamin Franklin Ruffin and Catherine Wallace Ruffin on March 15, 1935, in Durham, North Carolina. He was preceded in death by his first wife of 50 ½ years, Patricia Ann Daniel, in 2009, his brother Benjamin S. Ruffin in 2007 and his daughter-in-law Vanessa Jones (Fred Jr.) in 2014. According to the will of our Lord and Savior, he departed this world on Saturday, December 29, 2018, and was granted everlasting peace with Him. We are humble in submission to his will and are grateful for the privilege of knowing, loving and sharing life with him. Fred Sr. was raised in the close-knit West End Community of Durham, where the phrase “it takes a village to raise a child” was daily manifested. After graduating from Hillside High School, in the class of 1954, Fred joined the United States Air Force. He served in the Armed Forces with honor and retired after an exemplary and stellar 21 year career with the rank of Master Sergeant. He retired from his last assignment at Seymour Johnson Air Force base, Goldsboro, to his hometown of Durham, N.C. During his 21 year military stint Fred, Sr. completed tours in the Korean and Vietnam Wars overseas in exotic Thailand, Okinawa Japan, Goose Bay Labrador, England, Guam, Taiwan and the Philippines. He served as Captain, on most athletic teams, on the Air Force bases where he was stationed. On the mainland he was stationed at several bases primarily Kansas and South Dakota where his three children were born and Fort Worth, Texas. His passions were football, baseball, basketball, racquetball, handball, softball and golf. As a little boy Fred loved the game of Golf and played until he was unable. Fred, Sr. rose quickly to the rank of Master Sergeant acquiring along the way awards and recognition for service, behavior and valor. He received two Bronze Stars for Valor and Meritorious Service. After his military service, he obtained his Associates Degree in Business from Durham Technical Community College and went on to start his own business: Ruffin Realty and Insurance, Inc. He successfully maintained and managed this business for 20 years. After retiring a second time; in an effort to not be bored, Fred Sr. worked for 15 years for the State of N.C. as a Durham County School bus driver. In the last few years, Fred Sr. was challenged with the debilitating disease of Dementia and Alzheimer’s. Yet he remained physically strong, sensitively charming and still was capable of sharing his melodic baritone voice on request. He leaves to cherish his precious memories a wife Maethell Suitt. Fred Sr. was blessed with three children from Patricia Ann Daniel: Deborah Ruffin, Frederick Jr. (Paula) and Michael (Artina). Fred Sr. and Patricia had seven grandchildren: Lamont (Natalie), Kiah, LaTosha, Tabitha, Tiffany, Julian, LaShaun and two great grandchildren Preston and Aaron. He also leaves three sisters; Celestine McIver, Durham, N.C., Carolyn Blount, Durham, N.C. and Cheryl Smith, Durham, N.C. In-laws included Charles Edward Daniel, Sr., Jessup, M.D., George Henry Daniel (Manerva), Odenton, M.D., and Joletha Leathers, Durham, N.C. Family friend Tonya Lynn, Durham, N.C. And a host of nieces and nephews. A wake will take place on Thursday, January 3, 2019 from 5:00 p.m. until 7:00 p.m. at Morehead Avenue Baptist Church, 1008 Morehead Avenue, Durham, North Carolina 27707. Funeral services will continue on Friday, January 4, 2019 at Morehead Avenue Baptist Church, 1008 Morehead Avenue, Durham, North Carolina 27707 at 1:00 p.m., with a family visitation one hour prior to the service. Family will receive visitors at the home of Deborah Ruffin: 5215 Whippoorwill St. Durham, NC 27704 Cards & Flowers will be received at Scarborough & Hargett: 309 N. Queen St. Durham, NC 27701 A portion of any monetary gifts received will be donated to Alzheimer’s Association (https://www.alz.org/) Family request your Prayers.

Mr. Frederick K. Ruffin, Sr. was born to the late Benjamin Franklin Ruffin and Catherine Wallace Ruffin on March 15, 1935, in Durham, North Carolina. He was preceded in death by his first wife of 50 ½ years, Patricia Ann Daniel, in 2009, his... View Obituary & Service Information

The family of Mr. Frederick K. Ruffin, Sr. created this Life Tributes page to make it easy to share your memories.

Send flowers to the Ruffin, family.