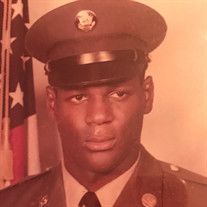 The passing of Mr. George Ivan Eason, age 59, on Sunday, November 17, 2019, at INOVA Fairfax Hospital, is being announced by his mother, Bertha Iola Vinson Eason. George Ivan Eason was the son of Mrs. Iola Eason and the late Arlinder Sherman Eason. He was born in Winston-Salem, North Carolina on June 27, 1960. Ivan attended Winston-Salem Public schools until the second grade when he moved to Seymour, Connecticut where he completed high school. While in high school, Ivan played football (number 73) and won several awards. Upon graduating high school, he joined the United States Army as a military policeman and retired after fourteen years as a sergeant. While in the military, he traveled extensively in Europe, where he met and married Gillian Foot. They were the parents of two children, Kai and Kiri. After the military, Ivan worked at the State Department in security for Ms. Madeline Albright for thirteen years and retired due to failing health. He was a jovial person and was a huge James Brown’s fan. His favorite teams were the New York Yankees and the Oakland Raiders. Ivan was preceded in death by his sister, Arlinder Sharon Eason. He will be remembered as a loving and caring son and brother and will be deeply missed by his children, Kai, of Richmond, VA, Kiri and his grandchildren, Kiyanna, Shyne, Dhani and Azeri (Baby Girl), of Stephen City, Virginia, his mother, Mrs. Iola Eason, his sisters, Margratha and Me-Me Chambers of Durham, NC, his brother, Ramondo Stallings of Scottsdale, AZ, his aunt, Mrs. Mamie Alston, Durham, NC, his God family, Reverend Darrell and Mrs. Jaffee White and family of Alexandria, VA, his best friends, Ronald Tuckett of Charlotte, NC, Russell Tuckett of Connecticut and William Brown of Durham, NC. A celebration of George's life will be held at Russell Memorial CME Church, 703 S Alston Ave., Durham, North Carolina 27701 on Saturday, November 30th; Family Visitation at 1:00 p.m. and Life Celebration Service at 2:00 p.m. Mr. George Ivan Eason will be laid to rest in Glennview Memorial Park.

The family of Mr. George Ivan Eason created this Life Tributes page to make it easy to share your memories.

Send flowers to the Eason family.