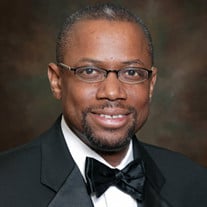 Dr. George Leander Hill passed away quietly in his sleep on Monday, February 23, 2015 at Duke University Medical Center. His final days were spent surrounded by friends and family that George had touched in some special way. George was born on November 7, 1963 in Queens, NY to George and Victoria Hill. George graduated from St. Paul’s Episcopal School for Boys in Garden City, NY in 1981. George then attended college at the University of Virginia in Charlottesville, VA where he received his B.A. in Psychology in 1985. While at the University of Virginia, George became a member of the Eta Sigma Chapter of Kappa Alpha Psi Fraternity, Incorporated. In addition, he was a member of the Daniel Hale Pre-Med Society and took pictures for the Cavalier Daily. After graduating from the University of Virginia, George moved to Tacoma Park, MD and attended graduate school at American University for one year. After a year, he decided to go to podiatry school and enrolled in The New York College of Podiatric Medicine in New York, NY. He received his Doctorate in Podiatric Medicine (D.P.M) degree in 1990. After graduation, he completed a surgical residency at the New York School of Podiatric Medicine. In addition, he completed an internship with Coney Island Hospital in Brooklyn, NY. George met his wife of twenty-five years, Karen, while attending the University of Virginia. The two fell in love and were married on September 30, 1989. Their union produced three beautiful children, Jasmine, Jillian and George, Jr. George relocated his family to Durham, NC in 1992. He took a podiatrist position with two local podiatry practices for a year and then began a post-doctorate research position with UNC Hospitals in Chapel Hill, NC. After completing the research position, he joined the Division of Vascular Surgery, UNC Hospitals in Chapel Hill in the wound clinic. In 1997, George hung his own shingle and began South Square Podiatry on University Drive in Durham, NC. In addition, he began a Diabetic Wound Clinic at Lincoln Community Health Center. In 2002, George relocated his practice to the Southpoint Mall area and changed the name of his practice to Southpoint Podiatry. He maintained Southpoint Podiatry until his death. Dr. George Hill was a member of Sigma Pi Phi Fraternity, Inc., One Hundred Black Men, the North Carolina Foot and Ankle Society and the Amercan Podiatric Medical Association. He also served as the Chair of the Health Care Committee for the Durham Committee for the Affairs of Black People. George enjoyed basketball, golf and telling a great joke everyday. He had great love for his family and friends. His father, George Washington Hill and his uncle, Vincent Cohen, Jr, preceded George in death. He leaves behind his wife, Karen and his three children, Jasmine, Jillian and George, Jr. He also leaves behind his mother, Victoria Hill, sister Lynette Parker and a host of aunts, cousins, nieces, nephews and dear friends. He will be dearly missed.

Dr. George Leander Hill passed away quietly in his sleep on Monday, February 23, 2015 at Duke University Medical Center. His final days were spent surrounded by friends and family that George had touched in some special way. George was born... View Obituary & Service Information

The family of Dr. George L. Hill created this Life Tributes page to make it easy to share your memories.

Dr. George Leander Hill passed away quietly in his sleep on Monday,...