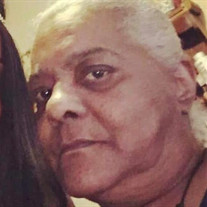 The passing of Mrs. Gloria Jean Barbee, age 73, on Tuesday, January 28, 2020, at Duke Medical Center, is being announced by her daughter, Chevella McNeil. Gloria Jean Edwards Barbee, better known as “Jean,” was born November 24, 1946 in Durham, North Carolina to the late Lonnie Wade Edwards Sr. and Janie Lee Edwards. Jean was educated in the Durham Public School System. She was employed by the Durham Police Department as a security guard for a short time. She also worked as a housekeeper and a beautician. She was married to Robert Barbee and had two children, Belvin and Chevella. Jean was known for her quick wit, one liners, and fast jokes. The things she would say would have you laughing and smiling all day. She was known for her soul food. On her menu, she would have fried chicken, turnip greens, macaroni & cheese, fried fish, pork chop sandwiches, pan fried corn bread, and her unforgettable chicken dressing. Jean was also an avid bizwiz and spades player. Jean lived life to the fullest. She was a kind and tender-hearted person who would help you in any way she could. She is survived by her daughter, Chevela McNeil (Larry); two grandsons, Nick McNeil (Ashley) and Broderick McNeil; one granddaughter, Bianca McNeil; one sister: Janie Delores McLean of Durham; two brothers: Reverend Travies L. Edwards (Fiancé Alice) of Hillsborough; Timothy J. Edwards (Patricia) of Carrboro as well as a host of nieces, nephews, relatives, and friends. She is preceded in death by her husband, Robert Barbee; her son, Belvin Edwards; her brothers, Lonnie W. Edwards Jr., and William Charles Edwards. A Service of Celebration has been scheduled for Sunday, February 2, 2020, at Scarborough & Hargett Celebration of Life Center, Inc., 309 N Queen Street, Durham, North Carolina 27701. The family will assemble for a visitation from 1:00 p.m. to 2:00 p.m., followed by the celebration service, at 2:00 respectively, with Rev. Travies K. Edwards, Jr. delivering the eulogy.

The family of Mrs. Gloria Jean Barbee created this Life Tributes page to make it easy to share your memories.

Send flowers to the Barbee family.