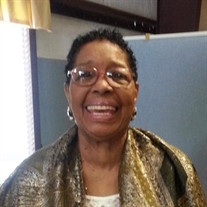 Gloria Mangum Holt, was born August 8, 1934 in Granville County to the late Ezekiel and Orgie Satterwhite Mangum. She departed this life on Saturday, September 29, 2018 after a lengthy illness at Hock Family Pavilion in Durham, North Carolina. She was preceded in death by her parents; brothers, Thomas Mangum, Willie Mangum, Ezekial Mangum Jr., and Johnny “PG” Mangum Sr., and one nephew Marlon Mangum. Gloria affectionally known as “Boochie” was a loving mother, grandmother, mother-in-law and aunt. She was known for being a great cook, and keeping a well decorated house. She loved to dress, and made sure that her hair was always immaculate. She also kept her grandson in the latest fashions. Gloria attended Durham Public Schools. After completion, she attended Bull City Barber College in Durham, North Carolina, and was one of the first female black barbers. She was employed at Friendly City Barber Shop for several years. Her employment included working at Scarborough Nursery School in Durham, NC as a pre-school teacher and Watts Hospital as a hospital attendant. Her extensive tenure was at Duke Medical Center (formerly Duke Hospital) from 1975-1995 as a lab Tech from which she retired. After retirement, she was a devoted private duty caregiver. Gloria was joined in holy matrimony to her love Joseph Lee Holt. From this union, one daughter, Soyna Reyna Holt McDuffie was born. Gloria loved spending time with her family and socializing. During the holidays and summers, her house was the “party” house. Her family members and friends, loved to come over and fellowship and laugh about good times. She was always willing to lend a helping hand to those in need. Boochie cherished the love that she had for her daughter, but she had unconditional love for her grandson Joseph, whom she adored. She and her daughter Reyna were inseparable. They would stay on the phone for hours, and their favorite past time was shopping on Saturdays and going to get their hair and nails done. Boochie, enjoyed traveling with her family and friends. Left to cherish her memory, her loving and devoted daughter, Soyna Reyna McDuffie, son-in-law William Issac McDuffie and grandson, Joseph Bryan Foley of Cary, NC; two sister-in-law’s, Catherine Mangum and Lillian Mangum of Durham, NC; four nieces, Audrey Mangum-Long and Beatrice Turrentine of Raleigh, NC, Alecia Jackson and Kay Mangum of Durham, NC; four nephews, Malcom Mangum and Johnny Mangum, Jr., of Durham, NC, Kenny Napier of Waycross, Georgia, Guyron Walker and Eric Walker of Newark, New Jersey; several great nieces and nephews, and a host of family and friends.

Gloria Mangum Holt, was born August 8, 1934 in Granville County to the late Ezekiel and Orgie Satterwhite Mangum. She departed this life on Saturday, September 29, 2018 after a lengthy illness at Hock Family Pavilion in Durham, North Carolina.... View Obituary & Service Information

The family of Mrs. Gloria "Boochie" Mangum Holt created this Life Tributes page to make it easy to share your memories.

Send flowers to the Holt family.