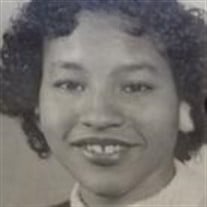 The family of Gloria Jean Brown McAdoo, age 76, announces her passing which occurred on Tuesday, January 14, 2020, at her home. Gloria Jean Brown McAdoo was born February 18, 1943 to her parents Mack Roy Brown Sr. and Doris Brown in Durham County, North Carolina. Gloria Jean was the eldest of ten children. She attended Durham Public Schools and at that time she was also employed at Duke Hospital. After graduating high school, she went on to attend and graduated from Durham Business College. After graduation she met her future husband Charles McAdoo, Sr., during that union they had a son, Charles McAdoo, Jr. whom has preceded her in death. In 1960, she moved to New York and started her career at Chase Manhattan Bank and Manufactures Hanover Bank where she excelled to Head Teller. She relocated to Newark, New Jersey and remained there for the next sixty years; the place she called home. She furthered her education and earned her Associates Degree in business. Upon graduation, she started a career at the Internal Revenue Service until she retired. She was a dedicated employee. Gloria Jean was well loved and her loving spirit filled a room, always soft spoken and had the most beautiful southern accent. Gloria Jean was a delight to anyone who had the pleasure to meet her, but, she stood for whatever she believed and was up for the battle if you challenged her. Her infectious smile and gentle demeanor will truly be missed by those that knew and loved her. Gloria Jean Brown McAdoo was preceded in death by her father, Mack Roy Brown, Sr., mother, Doris Brown, brother, Mack Roy Brown, Jr. and beloved son Charles McAdoo, Jr. Gloria Jean leaves to cherish in loving memory: six sisters; two brothers, Constance Cherry (Richard) of Irvington, NJ, Doretha Pettiford of Durham, NC, David Ronald Brown of Atlanta, Georgia, Sheridan Brown, Renee Brown, Jacqueline Brown, Valerie Brown Bates (Wade) and Trina Brown-Terrell (Warren) all also of Durham, NC. She also leaves to cherish her memories two aunts, a host of nieces, nephews, cousins and friends. A Service of Celebration has been scheduled for Saturday, January 25, 2020, at Faucette Memorial CME Church, 2124 Charles Street, Durham, North Carolina 27707. The family will assemble for a visitation from 1:00 p.m. to 1:30 p.m., followed by the celebration service, at 1:30 respectively.

The family of Mrs. Gloria Jean Brown McAdoo created this Life Tributes page to make it easy to share your memories.

The family of Gloria Jean Brown McAdoo, age 76, announces her...

Send flowers to the McAdoo family.