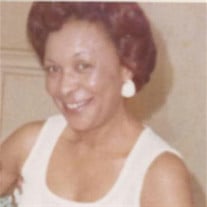 Gloria Williams Garret Pratt, the widow of Judge Carlisle Pratt, passed away at her home on October 3, 2014. Gloria was born in Tarboro, North Carolina on June 5, 1925. She was the only daughter of Dr. York David Garrett, Jr and Julia Bonds Williams Garrett. The Garretts moved to Durham, North Carolina in 1933 where she attended Pearson Elementary and Hillside High School. Gloria graduated from Howard University with a BA in economics in 1946 and was honored as Homecoming Queen. Following graduation she was on the administrative staff at the University for several years. Ultimately, she was employed at the United States Department of Labor where she became a member of the Senior Executive Service and a renowned international economist. Her position title was Chief of the Branch of Foreign Economic Policy. In that position she traveled world-wide to negotiate the terms of tariffs for the importing of foreign goods into the United States. She represented the Department in Geneva, Switzerland during the Kennedy Round of Tariff Negotiations. She was the first woman to do so. In addition to her two years in Geneva she served as a delegate to international conferences on trade policy and was lauded by the Department for making outstanding contributions to the improvement of U.S. foreign economic policy. Gloria enjoyed a full civic and social life. She was initiated into Delta Sigma Theta, Alpha Chapter, at Howard University. She was a member of The National Smart Set, the 8 Aces Bridge Club, Club Nine, The Demonons and The Wednesday Pinochle Club. She was especially skilled at bridge (once she played with Goren, an international expert), which was one of the activities that brought her and Carlisle together. They were married in August 1975. Her parents and her husband predeceased her as did her brothers, York David Garrett, III and Oliver Thomas Garrett. She is survived by: her brother Nathan Taylor Garrett and his wife Wanda Jones Garrett of Durham; her sister-in-law Aimee Pratt of Washington, DC; her stepdaughters Sharon Pratt of Washington and Benaree Pratt Wiley (Fletcher) of Brookline Massachusetts; her grandchildren Pratt Wiley of Boston Massachusetts, B.J. Wiley of Virginia, Aimee Dixon Anthony (Adrian) of Virginia, and Drew Dixon Williams (Wesley) of New York; her great-grandchildren Della Williams and Carlisle Williams of New York and Elizabeth Anthony of Virginia; her nephews and nieces Oliver Thomas Garrett Jr of Detroit, MI, Yvonne Garrett Moore of Newark, NJ, Michael David Garrett of Cary, NC, Shahida Andrea Garrett Mausi Johnson (Ray) of Detroit, and Devron Marc Wofford Garrett and Nathan T. Garrett, Jr. (Gail) of Durham. Her cousins who survived her and with whom she grew up are Judson Garrett Parker (Faith) of New York, Francis Garrett Price of Hempstead, NY, Hobart Carlton Price (Ernestine) of Freeport, NY, Leon Vincent Creed (Susan) of San Jose, CA, and George Burke Creed (Natalie) of Dallas, NC. Sharon Thomas, the daughter of long-time close friend Eva Nash, was her Godchild. Gloria was especially pleased to get to know almost all of the current offspring of her grandchildren and those of her nieces and nephews. During her illness she was comforted and served in many ways by her good friend Emilie Davis, caregivers Jillian Gatewood and Iola Fletcher, her family and her very, very large host of friends. Following a memorial service in Washington, DC at Howard University Law School campus at 2900 Vann Ness, NW on Saturday October 11, there will be a brief ceremony for the burial of her urn in the Garrett family plot at Beechwood Cemetery at 2:00 PM on Sunday, October 12. Arrangements for DC are by McGuire Funeral Home and in Durham by Scarborough and Hargett Memorial Chapel and Gardens, Inc. In lieu of flowers donations may be made in the name of Gloria Garrett Pratt to Howard University, 2400 Sixth St., NW, Washington DC 20059.

Gloria Williams Garret Pratt, the widow of Judge Carlisle Pratt, passed away at her home on October 3, 2014. Gloria was born in Tarboro, North Carolina on June 5, 1925. She was the only daughter of Dr. York David Garrett, Jr and Julia Bonds... View Obituary & Service Information

The family of Mrs. Gloria Williams Garrett Pratt created this Life Tributes page to make it easy to share your memories.