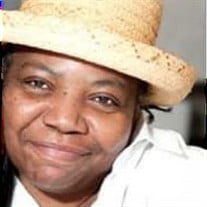 The family of Ms. Gwendolyn King, age 64, announces her passing which occurred on Saturday, October 31, 2020, at Duke University Hospital. The door of this life closed gently as Gwendolyn Shabon King crept forward on her heavenly journey Saturday, October 31, 2020, surround by her family. Gwendolyn, affectionately known as “Doe”, was born in Chadbourn, NC, February 6, 1956 to the late Jacob and Marie King. Preceding her in death was her daughter Annette King, born in Brooklyn, New York. Doe was raised in Brooklyn, New York. As a youth, she attended church, along with her siblings and close cousins. At an earlier age she accepted Jesus Christ and was baptized along with her family to become a member at Morning Star Missionary Baptist Church in Brooklyn, NY. As a youth Doe served on the usher board, youth choir, and local Girl Scout Troop. Doe was a quiet person, but still never at a loss for words. She lovingly said what she meant and meant what she said. In her past time, she enjoyed making hand dolls, crocheting, journaling, drawing, and her favorite playing bingo. Later, she moved to Chadbourn to care for family members. From Chadbourn, she moved to Durham to be closer to her mother and siblings. Doe graduated from Prospect Heights High School in Brooklyn, New York. In her earlier years, Doe worked diligently as a hospital volunteer Candy Striper; she worked in the Youth Program with the New York Housing Authority; a Paraprofessional with the Board of Education, City of New York. She also worked with the Federation of the Handicapped before moving to North Carolina. Doe took pride in her work and was dedicated and loyal to anything she did. With fond and lasting memories, she leaves her only son: Windell (Charlotte) Johnson, Durham, NC, one-sister: Sybil King, Durham, NC, four-brothers: James (Miriam) King; Keith Wayne King; Bryon R. King; Shawn (Annie) King. Five-grandchildren, Nigel Windell King; Chardell (Austin) Johnson Paul; Tuandell Johnson, Cordell Johnson, Carmelo Johnson; one great grandson, Adonis Paul, and a host of nieces, nephews, cousins, and friends. A graveside service of celebration has been scheduled for Sunday, November 8, 2020, at 12:00 noon at Mount Moriah Missionary Baptist Church Cemetery, 5333 Andrew Jackson Hwy SW, Chadbourn, North Carolina 28431.

The family of Ms. Gwendolyn King created this Life Tributes page to make it easy to share your memories.

The family of Ms. Gwendolyn King, age 64, announces her passing...

Send flowers to the King family.