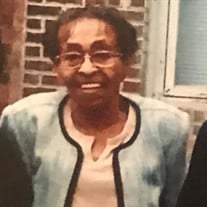 The family of Mrs. Hazel Blades Racks, age 92, wishes to announce her passing which occurred on Tuesday, June 8, 2021, at her home. HAZEL BLADES RACKS was born on January 10, 1929, in Brooklyn, New York. Hazel was born to Allan St. Osborne Blades and Gertrude Husbands Blades, who migrated to the city of New York from Barbados, West Indies. Hazel was predeceased by her parents and two siblings: Dorothy Blades Moore and Muriel Blades Rowe. She leaves to mourn, her daughter, Dianne Muriel Haynes, son, Eugene Allan Racks, daughter-in-law, Patricia Etta Pearson, granddaughter, Taren Michelle Wrighton, great-granddaughter, Autumn Taliaferrow; as well as nieces and nephews, great-nieces and nephews; and great-great-nieces and nephews. She will also be sorely missed by her Havanese Buddy, Lola. Hazel was educated in the City of New York’s public school system and graduated from Girls High School in Brooklyn, New York. For 32 years, Hazel was employed by the New York City Housing Authority in various administrative civil service positions. While there, she developed and maintained lifelong friendships with many of her fellow colleagues. They loved bowling in leagues together, attending Broadway shows in NYC; and sharing in more overseas cruises and vacation trips than can be recounted here. In particular, Hazel loved visiting Barbados, her parents’ birthplace in the Caribbean. Most of her friends predeceased her, but she had fond memories of their great times together. If there was one way to define Hazel, it would be “Life of the Party”. She was a Party Girl who loved to dance, have a good time and live life to the fullest. When she decided to retire from the Housing Authority, she did not stay put. She decided to work part time, as a ticket agent, for Adirondack Trailways in Kingston, New York where she lived for 10 years before relocating to Durham, North Carolina to be closer to her family. Over the years, Hazel was involved as a volunteer in numerous organizations, some of which were the Interfaith Humani Social Club, The Auxiliary Police of Laurelton of Queens, NY; and NYC Housing Authority’s Association of Black Officials & Retirees whose luncheons she attended annually until she was no longer able to travel long distance. Hazel lived life to the fullest, raised her two children single handedly and rarely complained. She was one who dealt with the joys as well as the trials and tribulations of life with the same positive attitude. Hazel could be counted on to always greet you with a smile, joke or do something that would put a smile on your face. At 92, she still worried about the latest nail polish colors and whether she would be able to twerk at her niece’s wedding. In other words, even while up in age, she was a force to be reckoned with, fiercely independent and strong willed but full of fun. Her physical health failed her but her mind was fully intact and sharp until her death. Sadly, Hazel suffered from multiple severe illnesses from November, 2019 until her passing on June 8, 2021. To say she will be missed, is an understatement but she will never be forgotten. Smiles will come onto many faces when memories of her come to mind. Right at this moment, she is deeply missed and loved by her family and remaining friends. Hazel’s family would like to express their sincere appreciation for the many words of kindness and support we’ve received during the passing of our beloved Mother and Aunt, the Family Matriarch. We particularly wish to Thank Kiameshia ‘Kiki’ Griggs, Marjorie McKenzie and Patricia Pearson for being so tremendously helpful in the day to day care of our Mother and Aunt during her last five months on this Earth. REST IN HEAVEN MOM AND AUNT HAZEL. A Celebration of Life Service will be held at Scarborough & Hargett Celebration of Life Center, Inc., 309 N Queen Street, Durham, North Carolina 27701, on Monday, June 14th; Viewing from 6:30 p.m. - 7:00 p.m. and Life Celebration Service at 7:00 p.m. To view the Celebration of Life Service through Zoom Live Stream: Please click the link below to join the webinar: https://us02web.zoom.us/j/82686679792? Webinar ID: 826 8667 9792 Passcode: 456397

The family of Mrs. Hazel Blades Racks, age 92, wishes to announce her passing which occurred on Tuesday, June 8, 2021, at her home. HAZEL BLADES RACKS was born on January 10, 1929, in Brooklyn, New York. Hazel was born to Allan St. Osborne... View Obituary & Service Information

The family of Mrs. Hazel Blades Racks created this Life Tributes page to make it easy to share your memories.

Send flowers to the Racks family.