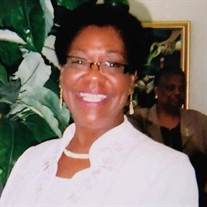 Helen Marie Smith was born January 21, 1950 at Wayne Memorial Hospital in Goldsboro, North Carolina to her parents, Elizabeth and Albert Smith, Sr. The saying "good things come in small packages" was coined the day Helen was brought home from the hospital. She was a premature baby so small, her paternal grandmother, Grandma Lula, brought Helen home in a narrow shoe box, however, the daughter Albert and Elizabeth would continue to nurture grew into a young women full of personality and delightful energy. Helen was the youngest of her four siblings and together their family lived as proud members of the Cherry Hospital Community. In the spring of 1968, Helen graduated from Dillard High School, and shortly thereafter, left home to attend airline Stewardess Training in Connecticut. Following her air travels, Helen lived and worked in New York City. While much of her younger days brought her great joy, Helen's struggles with substance abuse as a young adult caused she and her family much grief. She began treatment at two different rehabilitation centers before finally completing a program in Charlotte, North Carolina. While there Helen met and had a relationship with James Moore and on February 20, 1977 God granted them a baby boy. Ushered into motherhood with the birth of her only son and child, Telek Kente Smith, Helen found herself inspired by her responsibilities and used that as fuel to provide the best life she possibly could for the two of them. Immediately following the completion of her rehabilitation, Helen was awarded the Burroughs Welcome Opportunity Scholarship, which she used to train as a Substance Abuse Couselor at Durham Technical Community College. In 1990, Helen became a member of First Baptist Church in Chapel Hill and at the request of the Reverend Manley, Helen helped to found Out of Bondage, a group for recovering addicts in association with Narcotics Anonymous. The winter of 2012, Helen retired from the Durham County Jail where she worked for 18 years as a counselor for the STAR Program: dedicated to introducing inmates who were addicts to recovery in order to help them lessen the odds of returning to jail because of their addictions. On September 4, 2018, Helen celebrated 33 years of being in recovery. In those beautiful years she enjoyed spending time with her family, being a dedicated member of church, taking pictures, going to the beach, leading the family in prayer (especially at Thanksgiving), and blowing her whistle in celebration of others, or just life in general. Helen was preceded in death by her parents, Elizabeth and Albert Smith, Sr. Her energy lives on in her son Telek Smith; grandson Christopher Smith; one brother, Albert Blair Smith, Jr.; three sisters, Lula Glover, Betty Anita Rouse (Carl) and Gloria Jean Richmond; nieces, Albertina Smith-Banks, April Potts (Kevin), Angela Rouse Goldsby (Tim), Elizabeth Richmond; nephews, Matt Richmond (Brandi), Anthony Smith, Derek Rouse, Adrian Glover, God niece and nephew Joy Bingham, Lamont Bingham; six great nieces; seven great nephews; and a host of other family members and friends.

The family of Ms. Helen Marie Smith created this Life Tributes page to make it easy to share your memories.