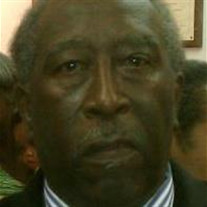 Isaac Sylvester Alston Jr. January 8, 1940 - February 20, 2018 Isaac, (BKA) Ike, or Bull, was born in Durham, North Carolina to Isaac Alston, Sr. and Mabel D Alston, who precedes him in death. Ike attended Merrick-Moore High School and later graduated from a local night school. He worked at the Durham Public Gas Company, and American Tobacco Factory in Durham. There was a union of Ike and Inez Farrington, whom after several years later, resided in Portsmouth, Va. Unto this union, was born two daughters, Tracy Alston-Hillsman, and Kimberly Alston. In the later years, he met and unioned to Nancy Smith, and with this union, a son was presented, Vashaun Alston. Ike went on to work at the Newport News Shipbuilding & Drydock inNewport News as a welder. Later, he joined the workforce at the Norfolk Naval Shipyard in Portsmouth, where he remained for over 40 years until his health prevented him from continued employment. In his spare time, Ike enjoyed working on cars and racing them. He spent many weekends with his son, grandson and closest friends at any race track along the east coast. You could always find him hanging out in his garage, working on his truck, and listening to good music. Ike was known for his particular taste in nice clothes and hats. From leather caps to leather shoes, he made sure to step out in his best threads. And when he wasn’t at the track, he enjoyed spendingtime with his family and loved ones. Ike leaves to cherish his memory, his wife, Nancy Alston; brother, Melvin Alston; children, Tracy Hillsman, (Michael Mosley), Kimberly Alston, Vashaun Alston, (Amy Jo Songer), Clara Smith, Darlene Nelms, (Micheal Nelms); Grandchildren; Jabari Alston, (Talisha Harrell), Shavarae Hillsman, (Abimbola Akinlosotu), Kiara Douglas (Anthony Wells), Terri Douglas, Antonyio Smith, Raquan Smith, Nasir Alston, Jayla Alston, Justice Alston, Sharnitha Johnson, and a host of great grandchildren, nieces, nephews, and cousins, and friends.

The family of Mr. Isaac Sylvester Alston, Jr. created this Life Tributes page to make it easy to share your memories.

Send flowers to the Alston, family.