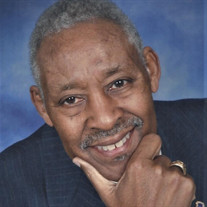 James Ranaldo Lawson was born September 13, 1943, in Cleveland, Ohio, to James and Cora (Parries) Lawson. He departed this life, Tuesday, August 23, 2018, at Duke University Hospital with his loving wife by his side. Ranaldo received his childhood education in the Cleveland Public Schools and graduated from East High School. He received his undergraduate degree in Social Science from Ohio University, Athens, Ohio in 1965; his master’s degree in History from North Carolina Central University in 1969; and his PhD degree from Kent State University in Student Personnel Administration in Higher Education in 1976. While at Ohio University he joined Omega Psi Phi Fraternity, Inc. Following receipt of his undergraduate degree, Ranaldo taught history, government and English for the Cleveland, Ohio, Board of Education until 1967. From 1968 to 1970, he was Director of Career Planning and Placement at Elizabeth City State University. He then matriculated towards his PhD degree at Kent State University where he also served as Coordinator of Developmental Assistance and Counselor. Ranaldo then held a variety of administrative positions at Cuyahoga Community College and Case-Western Reserve University, both in Cleveland, Ohio. In 1981, Dr. Lawson joined North Carolina Central University as an Assistant Professor of History and directed student teaching in the social sciences. As a member of the History Department, he was active in teaching African American History, U.S. Military, and U. S. History, and was greatly loved by his students. He was a member of the Faculty Senate, Teacher Education Council, Recruitment and Orientation Task Force, Faculty Advising Center, Minority Presence Committee, and the Faculty Newsletter Committee. He retired from North Carolina Central University in 2008. A Fifty-Year Active Member of the Omega Psi Phi Fraternity, Ranaldo was a truly dedicated Omega Man. He always looked forward to frat meetings and other Omega gatherings and was there all decked out in his purple and gold. He sincerely loved Omega Psi Phi and served the Fraternity in several leadership capacities over the years, including Faculty Advisor to the Tau Psi Chapter at NCCU. Because of his dedication to his fraternity, the Beta Phi Chapter is planning an annual golf tournament in his honor beginning this fall. As a part of this event, a scholarship will be established in Ranaldo’s honor. While at North Carolina Central University, Ranaldo met Davesene Wiggins Spellman, and they were married in 1984. He subsequently joined Davesene as a member of Holy Cross, and along with her, became an enthusiastically active member of the church. He became an usher and was always eager to serve as a lead usher. He considered it his duty to groom young men in the ways of being a responsible usher and took pride in identifying parishioners to present the offertory. Ranaldo was a member of The Holy Cross Men’s Club and the renowned Holy Cross Rib Joint where he tirelessly offered his services. Additionally, he was a Lector, he served on the Parish Council, and was a 4th-degree, Honorary Life-time member of the Knights of Columbus. Professionally, Ranaldo was known for his outstanding historical presentations at Holy Cross and within the local community. Indeed, he was an excellent keeper of historical facts, especially as they related to African American History. Ranaldo is survived by his devoted wife of 34 years, Davesene Lawson; three sons, Curtis (Tawanda), Derrick, and Daryl; one daughter, Querida; three grandsons, Darius, Tory, and Curtis, Jr.; one sister, Constance Davis; two brothers-in-law, David Wiggins, Jr. (Dorothy) and Withro Wiggins (Sandra); and a host of other relatives and friends. In lieu of flowers, contributions may be made to the scholarship in Ranaldo's honor. Checks should be made to: NCCU Foundation for The J. Ranaldo Lawson Endowment

James Ranaldo Lawson was born September 13, 1943, in Cleveland, Ohio, to James and Cora (Parries) Lawson. He departed this life, Tuesday, August 23, 2018, at Duke University Hospital with his loving wife by his side. Ranaldo received his childhood... View Obituary & Service Information

The family of Dr. J. Ranaldo Lawson created this Life Tributes page to make it easy to share your memories.

Send flowers to the Lawson family.