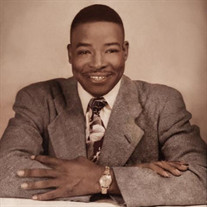 Mr. James William Hill, 96 years old, was born December 24, 1925, Author Hill and Mary Esther Hall Hill in High Point, North Carolina. James William Hill passed away on February 5, 2022, at his home in Durham, North Carolina. He attended public schools in High Point, North Carolina and was a graduate of William Penn High School. As a young man, James developed a strong work ethic that motivated him throughout his life. From William Penn High School, he entered North Carolina Agricultural and Technical State University in Greensboro, North Carolina where he earned a Bachelor of Science in Business Administration. While in college, he was initiated into Kappa Alpha Psi Fraternity Incorporated on December 7, 1944, where he served as Polemarch of the Alpha Nu collegiate chapter. James was also President of the Student Government Association at NC A&T. From Greensboro, North Carolina, James William Hill moved to Durham, North Carolina hoping to make use of his Business degree, and exhibit the work ethic that he had developed early on. He worked at several jobs, including shoe repair and teaching business courses at Durham Business College. It was during this time that James William Hill met Beulah Virginia Rowland of Durham, North Carolina. They were married on May 27, 1950. They were blessed with three children, James Rowland Hill, Virginia Dianna Hill, and Esther Althea Hil. It was also during this time that James William Hill began attending St. Joseph African Episcopal Church in Durham, North Carolina. There, he became a member and began lending his voice to the Senior Choir and later serving on the Steward Board. He did so for many years. He also lent his voice to speaking on behalf of St. Joseph AME Church as a delegate to many African Methodist Episcopal Church Conferences and was President of the Laymen’s Organization at St. Joseph. He has been heard to say many times, “As for me and my house we will serve the Lord.” As time went on, James William Hill became involved in the community. He was a member of the NAACP, and regularly attended their annual conventions. He attended the well-remember March on Washington for Jobs and Freedom in 1963. He continued to teach at Durham Business College and took on additional administrative responsibilities of Comptroller and Business Manager. Durham Business College grew in enrollment, and became Durham College, offering Associate and Applied Science Degrees. In 1974 James William Hill became President of Durham College and oversaw the matriculation and graduation of hundreds of students who were seeking college degrees while learning the skills needed to be successful in the business world. After the closing of Durham College, James William Hill worked as a Certified Public Accountant for Garrett and Sullivan Accounting Firm handling various accounting and auditing cases. James William Hill remained an active alumnus of North Carolina Agricultural and Technical State University, a true “Aggie.” He was also a life member of Kappa Alpha Psi Fraternity Incorporated, where, over the years he held various official posts, including Polemarch of the Durham Alumni Chapter. In recent years, James William Hill has limited his outside-the-home activities. Yet, he could still be heard from the family room of his home singing the refrain “trust and obey for there’s no other way to be happy in Jesus but to trust and obey…” James William Hill was preceded in death by his wife of 64 years, Beulah Rowland Hill, and is survived by his son James Rowland Hill (Candice), daughter Virginia Dianna Hill, and daughter Althea Hill McPhail (Gerald); sister Barbara Hill Boulware; five grandchildren- David Hill, Joel A. Hill (Chenique), JoAnna McPhail, Rachel Hill Kuiper (Brandon) and Jessica McPhail Ross (Kashin); and 3 great grandchildren – Kylenn James Ross, Prayer McPhail-Neal, and Emerson Lily Kuiper, along with a host of nieces, nephew, and friends. Funeral services to celebrate the life of Mr. James William Hill are as follows: Viewing; Saturday, February 12, 2022, from 10:00 a.m. - 11:00 a.m., with the Celebration of Life Service beginning at 11:00 a.m., at St. Joseph AME Church, 2521 Fayetteville Street, Durham, North Carolina 27707, with the Reverend Valerie McIver delivering the eulogy. Burial will take place on Sunday, February 13, 2022, at Glennview Memorial Park, at 2:00 p.m. •Attendance at the service is limited to one hundred and fifty individuals and in every effort to protect our families and their guests, face coverings are required upon entering our facility. The Homegoing Service for Mr. James William Hill will be streamed live via the St. Joseph AME Church's website at https://www.stjosephame.org/ In lieu of flowers, memorials may be made to: Dementia Alliance of NC- https://dementianc.org/?form=DANCDonate Durham College Alumni Association: Send donations to the Association's CashApp at $DurhamCollegeNC or mail checks, made payable to Durham College Alumni Association, to Sarah Baldwin, President, Durham College Alumni Association - 3411 Winston, Road, Durham, North Carolina 27704 Please keep this family in your thoughts and in your prayers.

The family of Mr. James William Hill created this Life Tributes page to make it easy to share your memories.

Send flowers to the Hill family.