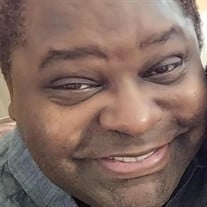 The passing of Mr. James Wesley Jamison, age 56, on Sunday, March 15, 2020, at his home, is being announced by his loving wife Portia. James Wesley Jamison was born January 12, 1964 in Sanford, NC to Louis James Jamison (deceased) and Rosa Lee Holmes. He is survived by his wife, Portia Made-Jamison, sister, Greta Michele Reels and husband Ralphele Reels, his mother, and mother-in-law, Marjorie N. Made. He is also survived by his aunt, Mary Crutchfield, uncle, Levern; his uncle Robert, preceded him in death. James attended Immaculata Catholic School and Hillside High School in Durham, NC. While at Hillside, he was a member of the wrestling team. His love for the sport continued throughout his life. After graduating, he attended North Carolina Central University and Durham Technical Community College. Post college, James worked at a radio station in Durham as a disc jockey under the moniker “Wesley J.J.” He was known for his golden, smooth, and soothing voice. Music nourished his soul and he had a beautiful singing voice. He enjoyed reading and learning about Naturopathy. He had excellent retention and recall for medical information. James was easy going with a tender soul. He had an infectious smile and when he laughed, you couldn’t help but laugh with him. He approached life with logic and humility. James met his South African wife, Portia, in 1995. They married April 27, 1996 in a Little Chapel in Cary, NC, and enjoyed a simple life in their home in Hillsborough. He was devoted to his adoring wife. Although they had no children, they later took financial responsibility of five orphaned children, Momo, Phumi, Kagi, Lance and Lebo, in South Africa. In November, 2019, James finally traveled to South Africa where he was welcomed with love and great joy by his African family. He was given two African names: 1) Sipho (pronounced Sypo) which means Gift from God and 2) Thando (pronounced Tando), meaning beloved. James passed-away peacefully in his home in Hillsborough with his wife by his side. He was 56 years old. They would have been happily married 24 years on April 27th. To his wife, he was a bright shining star that lit her life for the time they shared together. James and Portia loved each other unconditionally, shared mutual respect and admiration, celebrated their differences, and were the best of friends. James has gone back home; he is profoundly missed, and forever loved. A viewing has been scheduled for Friday, March 20, 2020, at Scarborough & Hargett Celebration of Life Center, Inc., 309 N Queen Street, Durham, North Carolina 27701, from 12:00 noon until 2:00 p.m.

The passing of Mr. James Wesley Jamison, age 56, on Sunday, March 15, 2020, at his home, is being announced by his loving wife Portia. James Wesley Jamison was born January 12, 1964 in Sanford, NC to Louis James Jamison (deceased) and Rosa... View Obituary & Service Information

The family of Mr. James Wesley Jamison created this Life Tributes page to make it easy to share your memories.

Send flowers to the Jamison family.