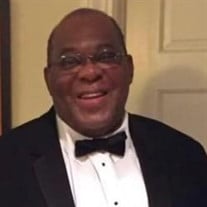 The passing of Mr. James John Lewis, on Wednesday, June 23, 2021, at Duke University Hospital is being announced by his loving and devoted wife Sylvia. James John Lewis was born on Monday, January 5, 1953 in Brooklyn, New York. He was fondly referred to as, Bra (short for brother), by his family. He attended Saint Ambrose School, George Wingate High School, John Jay College of Criminal Justice, Wilberforce University (Bachelor of Arts) and a host of other colleges and universities for Seminary and graduate studies. James' dad, Willie Roy Lewis, identified his entrepreneurial spirit and strong work ethic as a young boy. His Dad purchased James a shoeshine kit and taught him the art of shining shoes. Soon after, James had a shoe shining business that he operated before elementary school every morning. That same spirit and ethic led him to become a Probation/Parole Officer in North Carolina, during the 1980s. Furthermore, that same spirit and discipline allowed him to provide for his family and nurture and protect his family. Reading was one of his favorite pastimes. The Bible, prayer and meditation granted him comfort and strength to move through the difficulties of life. Think and Grow Rich, by Napoleon Hill, was his second favorite book. It was this book that manifested his daily life philosophy of positive thinking. James was a member of White Rock Baptist Church, in Durham, North Carolina, since the early 1980s. Lastly, he absolutely loved to fellowship! He never met a stranger. Time spent with family and friends was the highlight of his day. He loved talking, laughing and debating. His best debate buddy was John Nixon. They are cousins, but their bond was more like brothers. He attended meetings of his beloved fraternity, Alpha Phi Alpha, Inc. He also was a member of the Eppos Social Club where he participated in meetings, fundraisers and conventions. He was also a member of the Sertoma Club, attended meetings of the NAACP and the Durham Committee on the Affairs of Black People. Because of his relationship with God and the Angels above, James had the divine intuition to reach out to many family members and friends, for one last opportunity to chat, fellowship and express his love. James is survived by his wife, of 47 years, Mrs. Sylvia T. Lewis. He is also survived by his four daughters; Camille Moulton-Trofort (Louis Patrick Trofort), Shamika Lewis, Avra Lewis and Jamie Lewis. He is also survived by his sister, Jacqueline Lewis and his brother, Robert Lewis; his nieces and nephews, Angel McCann (Ramel), LaToya Thurston-Griggs (Taurus), Monique (Nikki) Keller (David), Julian Moyer and Jarod Moyer; great nieces and nephews, Ezana Thurston-Griggs, Karen Thurston-Griggs, TaShawn Griggs, Kalila Keller, KeiShawne Moyer, Aaliya Hart White; great great niece Mariah Griggs-Foust. He is also survived by his aunt, Sarah Mae Lewis Nixon (Leon), John Nixon (Genise) and his family, Louvinia Nixon, Leon (Junior) Nixon (Betty) and his family, Ella Lewis' family, John A. Lewis' family (Mildred), James France's family (Inette), Flora Lewis' extended family and a host of many more family members. James was preceded in death by his parents, Willie Roy Lewis and Flora France Lewis; brothers, Willie Roy Lewis, Jr. and Michael Anthony Lewis; sister, Sharon Lewis; cousin, Leon (Junior) Nixon; aunts, uncles and other cousins. Though his laugh, his smile, and his physical presence are all missed; it brings comfort knowing that he is perpetually here in spirit. A service to celebrate the life of Mr. James John Lewis will be held on Saturday, July 3, 2021, at 1:00 p.m., at White Rock Baptist Church, 3400 Fayetteville Street, Durham, North Carolina 27707, with a viewing from 12:00 noon-1:00 p.m. Mr. Lewis will be laid to rest in Beechwood Cemetery.

The passing of Mr. James John Lewis, on Wednesday, June 23, 2021, at Duke University Hospital is being announced by his loving and devoted wife Sylvia. James John Lewis was born on Monday, January 5, 1953 in Brooklyn, New York. He was fondly... View Obituary & Service Information

The family of Mr. James John Lewis created this Life Tributes page to make it easy to share your memories.

Send flowers to the Lewis family.