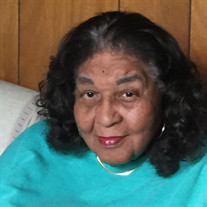 Condolences are being expressed to the family of Mrs. Jessie Pulley Parker, age 91, who passed away on Sunday, March 3, 2019, at Hock Family Pavilion, 4023 N Roxboro Street, Durham, N.C. 27704. She was born on March 16, 1927 in Durham, North Carolina to the late Renwood Manley Puller, Sr. and Lyda Cozart Pulley. She was the oldest of four children, and was predeceased by Thelma P. Stiney, Renwood M. Pulley, Jr. and Ruth P. Teasley. Mrs. Parker was educated in the Durham Public School System and graduated from Hillside High School in 1943. She attended North Carolina College for Negroes (now known as North Carolina Central University) where she studied business. She had a thirst for knowledge from a very early age and was an avid reader, having read all the books in Stanford L. Warren Library by the time she graduated from High School. She was married to the late Gerald Warren Parker, Sr. and to this union they were blessed with four children. During the early years, when her children were young she was a homemaker. She began her career outside the home in 1961 as a secretary at Southeastern Business College where she also taught business classes. She then transitioned to the Durham City Schools serving as the secretary at Crest Street, Walltown, and North Durham Elementary Schools. Mrs. Parker retired from North Carolina Central University after 20 years of service serving in several capacities but retiring as the Administrative Secretary to the Assistant Chancellor for University Relations, Dr. Tyrone Baines. Mrs. Parker loved the Lord and gave her life to Christ at an early age. She grew up in and was baptized at White Rock Baptist Church. After marriage they moved to the Walton Community and she joined St. John's Baptist Church. She reunited with White Rock Baptist Church when the family moved to the Forrest View Heights Community in 1968. As a member of White Rock, she served for many years on the Trustee Board and later became Trustee Emeritus. Mrs. Parker enjoyed great gospel music and attended Peach Missionary Baptist Church, especilaly on third Sundays to hear the melodious "Voices of Peace". She would say "They are the BEST choir I've ever heard and I know good sing when I hear it. Mrs. Parker was a loving wife and mother. She took great care of the home and family. Holidays and birthdays were special to her and she took great pride in celebrating these moments and making these times memorable for the Parker household. She was a master cook and could produce scrumptious, delectable meals that were memorable and pleasing to all. Her love for travel took her many places and she and her late husband Gerald took cruises to Mexico and the Caribbean, traveled to Niagra Falls, the NC Mountains, Williamsburg, VA and many other tourist sites. Surviving relatives include her one daughter, Donna M. Parker; three sons, Gerald W. Parker, Jr., Kenneth A. Parker and Harold M. Parker (Barbara); two grandchildren, Derrick Warren Atkins and Jamie Brothers; two great grandchildren, Jacquel Brothers and Jamison Brothers. She also leaves to treasure her memories six godchildren; Karen G. Alston, Joan P. Packenham, A. Denise Cotten, Dwight M. Patterson, Minister Quintelia Mitchell and Clifton R. Baldwin. Funeral services will take place on Friday, March 8, 2019, at Peace Missionary Baptist Church, 2608 NC Hwy 55, Durham, North Carolina, 27713, at 1:00 p.m. The family will greet friends one hour prior to the service.

The family of Mrs. Jessie Pulley Parker created this Life Tributes page to make it easy to share your memories.

Condolences are being expressed to the family of Mrs. Jessie...

Send flowers to the Parker family.