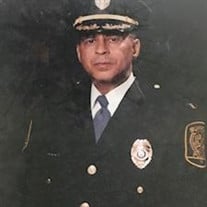 Condolences are being expressed to the family of Mr. Jimmy L. Wilson, age 73, who passed away on Thursday, May 30, 2019, at Hock Family Pavilion, 4023 N Roxboro Street, Durham, N.C. 27704. He was one of seven sons born to the late Larry and Juanita Wilson of Durham, North Carolina. Jimmy graduated from Hillside High School in 1964. After graduation, he enlisted in the US Army and married his high school sweetheart, Bernadette Hopkins. To that union was born a daughter, Sharen - the true apple of his eye. He served four years in the army working in security and foreign communications intelligence. In the early 1970's, he volunteered often at the YMCA in Washington, DC. There he mentored young men and coached the basketball team. Shortly after his discharge from the Army, he joined the Washington, DC Police Department and remained in law enforcement for 39 years. In DC's sixth precinct, Jimmy rose through ranks as he was instrumental in reorganizing the department's homicide investigation unit and headed investigations into the 1981 attempted assassination of President Ronald Reagan. In his illustrious career, Jimmy later served as Deputy Chief of Police in Washington, DC; Chief of Police in Jackson, MS; Chief of Police in Canton, MS; and Chief of Police in Suffolk, VA. While pursuing a demanding career in law enforcement, he managed to find time to seek and obtain an Associate Degree, a Bachelor of Science Degree and a Master of Science, Education. Because he truly enjoyed his work, he found time to work in many other aspects of law enforcement: President of the National Organization of Black Law Enforcement Executives; Director of Public Safety of VA State University; taught Police Management and Supervision at Penn State University; President, CEO of Global Public Safety Services in Suffolk, VA; and as an ATA (Anti-Terrorist-Association) Lead Instructor that sought his expertise in multiple foreign countries. Jimmy enjoyed spending quality time with his daughter, granddaughters (Quintina and Sharena) and other family members. Among his hobbies were fishing and boating. Jimmy is predeceased by his parents, Larry N. Wilson and Juanita C. Wilson; his brothers, Clarence Wilson, Edward Wilson and Nathaniel Wilson. Surviving relatives include his daughter, Sharen A. McGlothen of Manassas, VA; brothers, Larry Wilson, Jr. (JoAnn) of Durham, NC, Kenneth Wilson (Cynthia) of Raleigh, NC and Kerry D. Wilson (Kimberly) of Bowie, MD; sister-in-law, Melverleen Wilson of Wilson, NC; grandchildren, Quintina and Sharena McGlothen; and a host of nieces and nephews, relatives, friends and special friend Jacqueline Cooper of Louisville, KY. Funeral services will take place on Wednesday, June 5, 2019, at Union Baptist Church, 904 N Roxboro Street, Durham, North Carolina, 27707, at 12:00 noon, with a family visitation one hour prior to the service. Mr. Jimmy L. Wilson will be laid to rest in Glennview Memorial Park.

Condolences are being expressed to the family of Mr. Jimmy L. Wilson, age 73, who passed away on Thursday, May 30, 2019, at Hock Family Pavilion, 4023 N Roxboro Street, Durham, N.C. 27704. He was one of seven sons born to the late Larry and... View Obituary & Service Information

The family of Mr. Jimmy L. Wilson created this Life Tributes page to make it easy to share your memories.

Condolences are being expressed to the family of Mr. Jimmy L....

Send flowers to the Wilson family.