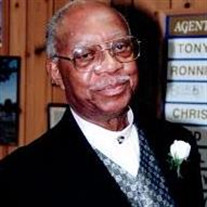 John Mason, 92, of Durham, North Carolina, passed away on Thursday, October 6, 2016, in Charlotte, NC. John was born on August 20, 1924, to the late Lettie Hogans Mason and John Luther Mason. He attended Durham City Schools and graduated from Hillside High School in 1942. He enlisted in the United States Navy in May 1942 and was commissioned as a member of the B-1 Navy Band, Musician Second Class. After an honorable discharge in July 1944, he began employment with the Durham County Department of Social Services and ultimately became the first African-American Purchasing Agent for the Department. He retired after more than 35 years of service to the Department. John was involved with a number of community service, civic and charitable organizations including the NAACP and The American Red Cross. He was a member of Kyles Temple AME Zion Church and served as Chairman of the Stewards Board, a member of the Board of Trustees and Chairman of the Board of Trustees. John was preceded in death by his wife, Lossie McNair Mason, and his daughter Lemuria St. James-Benham. He is survived by his son, Fred N. (Freddy) Mason, Sylmar, CA, and his daughters Gail L. Mason, Charlotte, NC, and S. Y. (Sharyl) Mason-Watson (George Watson), Charlotte, NC; three grandchildren, six great-grandchildren and a host of nieces, nephews, cousins and other relatives. Graveside services will be held at Beechwood Cemetery in Durham, NC, on Wednesday, October 12, 2016, at 11:00 AM. Scarborough and Hargett Funeral Home, Inc., is serving the family.

The family of Mr. John Mason created this Life Tributes page to make it easy to share your memories.

John Mason, 92, of Durham, North Carolina, passed away on Thursday,...

Send flowers to the Mason family.