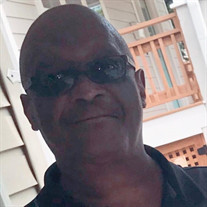 Mr. John Lincoln Smith was born on January 19, 1949 in Durham, N.C. to James Thompson and Cora Mae Smith Douglas. He departed this life on his birthday, Saturday, January 19, 2019 at the VA Medical Center in Durham, N.C. John Lincoln as he was affectionately known by his family and friends attended Durham Public Schools. John decided on February 17, 1967, while a senior in high school, to join the U.S. Army. After serving his time in the Army, he returned to Durham where he then enrolled in school and received his GED. John moved to New York and worked for the United States Post Office in Manhattan. A few years later he found his way back to Durham, N.C. where he worked at Duke Hospital for a long period of time. John then landed a job at the North Carolina School of Math and Science as a security officer in which he retired from. He enjoyed fishing, watching old western movies, basketball and he was a huge fan of the Washington Redskins. Most of all he loved his family dearly. John was preceded in death by his wife Annie Frances Smith, his grandmother Ella Smith, sister Doretha Marie Smith, and niece Tequila Montelle Smith. He leaves to cherish his memories his mother, Cora Mae Douglas; his father, James Thompson of Harlem, New York; one daughter, Brenda S. Williams (Charles); granddaughter, Brianna A. Williams; one niece, Natasha Smith; six great nieces, Zakeeyah Cameron, Lazayrea Smith, Naema Leathers, Kianta Smith, Anyvia Brandon, and Harmonie Brandon; three great nephews, Ronald Leathers, Antonio Cameron, and Jamonte Green; one great-great nephew, Kaden Smith; two sisters-in-law, Leugenia Jenkins (Walker) and Eula Brooks (Roy); close cousins; the Harper and Green families; and a host of loving relatives and friends. Funeral services will take place on Saturday, January 26, 2019 at Mt. Vernon Baptist Church, 1007 S Roxboro St., Durham, North Carolina 27707, at 12:00 noon, with a family visitation one hour prior to the service.

The family of Mr. John Lincoln Smith created this Life Tributes page to make it easy to share your memories.