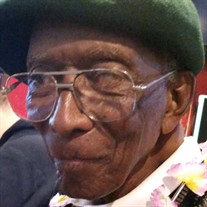 Condolences are being expressed to the family of Mr. John Louis Smith, age 90, who passed away on Monday, September 23, 2019, at his home in Boston, Massachusetts. John Louis Smith was born to the late Harry and Daisy Pointer Smith on October 2, 1928 in Durham, North Carolina. John was the youngest of three children; his sister Ganelle Washington and brother Luther Smith preceded him in death. John Louis was educated in the Durham City Public School System; graduating from Hillside High School in 1948. He joined the U.S. Army in 1950 and served during the Korean War. John married Alberta and out of this union one son (Darryl Smith) was born. John Louis loved to run marathons and was very proud that at the age of 50 he held the record for the 400 and 800 meter at 55.3 seconds and 2.12.3 minutes respectfully. John Louis relocated to Boston, Massachusetts in the mid-seventies and was welcomed into the community so he decided to make Boston his home. He was called Louis by his new family there in South Boston. John Louis spoke of them often to his family. John Louis spent his life serving others by doing home repairs and renovations, repairing and selling bicycles and mentoring young men. Bicycles is how John Louis met one of his best friends Charlie (preceded in death), John Louis worked faithfully in the Bicycle Shop with Charlie until the business closed. He also worked at the Tom English Cottage where he would also socialize with his friends. He leaves to cherish his absence his son Daryl Smith; sister Dorothy Covington of Durham, NC; two nieces, Barbara Smith (Virginia) and Cynthia Ware (New York); one nephew, Glenn Smith (New York); six great-nieces, Monica Adams and Monique Washington of Durham, Jasmine Smith, Akqra Smith, Asia Ware and Anayah Smith all from New York; two great nephews, Omar Adams and Jared Thompson of Durham, NC; a host of great great nieces, nephews, cousins, other family members and friends. He had an extended family as well, Helen Lee (California) and his special friends in Boston, Jeanne McCarthy, Thomas Flannery and Thomas English. A celebration of John’s life will be held at Bell Yeager Freewill Baptist Church, 128 E Cornwallis Road, Durham, North Carolina 27707 on Monday, October 7th at 2:00 p.m. Mr. John Louis Smith will be laid to rest in Beechwood Cemetery.

Condolences are being expressed to the family of Mr. John Louis Smith, age 90, who passed away on Monday, September 23, 2019, at his home in Boston, Massachusetts. John Louis Smith was born to the late Harry and Daisy Pointer Smith on... View Obituary & Service Information

The family of Mr. John Louis Smith created this Life Tributes page to make it easy to share your memories.

Condolences are being expressed to the family of Mr. John Louis...