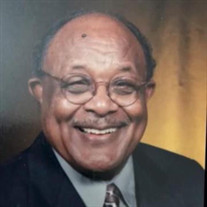 With sorrow and fond memories, the passing of Dr. Joseph Thurman Mitchell, age 93, on Wednesday, December 16, 2020 is being shared by his son Ricky. Also left to cherish his memory are his three grandchildren, Derek, Kadenna and Joshua; and a host of extended family members and friends. Joseph is preceded in death by his wife, Patsy Grimes Mitchell; daughter, Brenda Yvonne Edwards; three siblings, Esther M. Jenkins, James R. Mitchell, Jr. (both of New York) and Josephine M. Plummer (Durham). Dr. Joseph Thurman Mitchell's story began on October 29, 1927, when he was the fourth and last child born to the late James Robert Mitchell, Sr. and the late Lucy Evans Mitchell in Durham, North Carolina. He attended Durham public schools and was a student at Hillside High School during the World War II era. At Hillside, he played football and he was the last member of the infamous '43 Hornets football team that was "undefeated, untied, unscored upon". Joseph was also among a group of students who helped sustain the band program in the absence of a band director--perhaps a harbinger of the career in music that lay ahead of him. Dr. Mitchell's long association with St. Joseph African Methodist Episcopal Church began before he graduated from high school. In the spring of 1944, with fewer men in the church due to the war effort, Mrs. Bessie Whitted, director of the Senior Choir, and J. J. Henderson, the choir's president, decided to invite male singers from Ms. Teresa Claggett's Hillside High School chorus to sing with the Senior Choir. Thus the relationship between Joe, as friends call him, and St. Joseph AME was born--a collaboration that has produced beautiful music for 70 years! After graduating from Hillside in 1945, Joe enrolled at North Carolina College, now North Carolina Central University, on a football scholarship. While majoring in music at NCC, he filled in as director of St. Joseph's Senior Choir, and officially took on that position in 1956. Dr. Mitchell then directed the Senior Choir from 1956 to 1971, followed by Dr. Charles Gilchrist from 1971 to 1975. Dr. Mitchell resumed the work as Senior Choir director from 1975 to 1979, from 1996 to 2003, after the death of Dr. Gilchrist in 1996, and again in 2008. Dr. Mitchell also earned two advanced degrees along his musical journey: a master's degree in music education from Chicago's VanderCook College of Music, and an Ed.D. in music from the University of North Carolina at Greensboro. Under Dr. Mitchell's direction, the St. Joseph Senior Choir recorded two albums: Handel's Messiah in 1966 and Theodore Dubois' The Seven Last Words of Christ in 1971. He stepped down as director os the Senior Choir in 2003 to teach at Fayetteville State University. Upon his return to Durham and St. Joseph's in 2004, Dr. Mitchell reassumed the position of director of the Men of St. Joseph Chorus, which was assembled under his musical leadership in 1998. Over the years between 1944 and the present, Dr. Mitchell's musical talents, studies and successes as a teacher and band director have taken him away from St. Joseph at various times. Fortunately for us, however, he has always come back home. His many notable career achievements include directing the bands at Freedman High School in Lenoir, North Carolina; Hillside High School and NCCU. He also has taught at Morris College, Shaw University and Fayetteville State University. On a more personal note, he counts the loves of his life first among the highlights of his adult life: his wife, Patsy Grimes Mitchell; daughter, Brenda Yvonne; son, Rick, and grandchildren Derek, Kadenna and Joshua. Beyond St. Joseph, Dr. MItchell served as music director/saxophonist with the North Carolina Jazz Ensemble. His many musical activities in the larger community also include imparting his insights and wealth of musical knowledge to the next generation of musicians. Bravo and very special thanks to St. Joseph's own maestro and treasured friend, a master conductor, consummate music educator, and inspiration in the larger Durham community and beyond -- Dr. Joseph Thurman Mitchell! We ask that you keep the Mitchell family in your thoughts and in your prayers. A memorial service has been scheduled for Saturday, January 16, 2021, at 1:00 p.m. at St. Joseph AME Church, 2521 Fayetteville Street, Durham, North Carolina 27707. The memorial service will be streamed live via the St. Joseph AME Church's website at https://www.stjosephame.org/

With sorrow and fond memories, the passing of Dr. Joseph Thurman Mitchell, age 93, on Wednesday, December 16, 2020 is being shared by his son Ricky. Also left to cherish his memory are his three grandchildren, Derek, Kadenna and Joshua; and... View Obituary & Service Information

The family of Dr. Joseph Thurman Mitchell created this Life Tributes page to make it easy to share your memories.

With sorrow and fond memories, the passing of Dr. Joseph Thurman...

Send flowers to the Mitchell family.