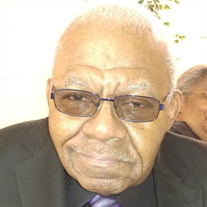 Larry Leondras Green began his journey on June 26, 1946 in Durham, North Carolina. He was the loving son of Alice Avery and the proud brother of George I. C. “Snoot” Green, Jr. and Joyce Ann Green Clay. He was educated in the Durham Public Schools system, matriculating from Hillside High School in 1964. He continued his education at NC College and Durham Technical Community College before enlisting in the United States Army in 1967. He served on active duty until 1970. In 1974, he joined in Holy Matrimony with Lauren Elise Brown. They remained faithfully and lovingly committed to one another for 43 years. Their family grew by two in 1976 when they welcomed twins; a son Michael Lawrence Sr., and a daughter Marchelle Alyce. The family would later expand to include a daughter in love Theresa and grandchildren Kel, Michael Jr. and Mikalah. Larry enthusiastically served as Co-Founder and leader of the collective known as “#TeamGreen”. A faithful Believer and follower of Christ and a Minister of Music, Larry served as a musician for several local churches including: Bethel Tabernacle Holiness Church, Terrell’s Creek Baptist Church, Mount Zoar Baptist Church, Ebenezer Baptist Church, Peace Missionary Baptist Church, Russell Memorial (where he served for 25 years), Bell-Yeager Baptist Church, Lincoln Memorial Baptist Church, Gethsemane Baptist Church and God’s Property Baptist Church, which he joined in 2012. Larry spent much of his professional career at Blue Cross and Blue Shield of North Carolina, where he worked for 20 years. He retired in 1998. After retirement, Larry spent his time serving others, spending time with family, being a Granddaddy, being a member of Doric Lodge 28PHA and making beautiful memories. He truly lived each day to the fullest and leaves a legacy of faith, love, and service. Larry Leondras Green ended his earthly journey on October 13, 2018. His loss will be profoundly felt by his wife, children, grandchildren, sister, aunts, nieces, nephews, godsons Alex, Randy and Raleigh and a host of dear friends. Funeral services will take place on Friday, October 19, 2018, at 1:00 p.m. at Northeast Baptist Church, 3204 NC Hwy 55, Durham, North Carolina 27713, with a family visitation one hour prior to the service.

Larry Leondras Green began his journey on June 26, 1946 in Durham, North Carolina. He was the loving son of Alice Avery and the proud brother of George I. C. &#8220;Snoot&#8221; Green, Jr. and Joyce Ann Green Clay. He was educated in the Durham... View Obituary & Service Information

The family of Mr. Larry Leondras Green created this Life Tributes page to make it easy to share your memories.

Send flowers to the Green family.