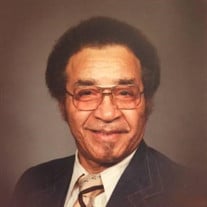 Mr. Lawrence Daye, Jr., the son of the late Lawrence W. Daye, Sr. and Maryola Clemons Daye was born on September 29, 1926 in Granville County. He received his education in the Granville County Public School system. On September 17, 1947, he was united in holy matrimony to Louise Hawley. From this union, two daughters and four sons were born: Joyce Ann McAdoo (Dr. Harold), Pinehurst, NC; Elvira (Angel) Bostic ( Joe) Raleigh, NC; three sons, Donnell (Stephanie Barnes), Durham, NC; Lawrence, III (Bonnie Lee) Rougemont, NC, and Alexander (Dorothy), Hertford, NC. During his childhood and continuing in his adult years, he was privileged to enjoy the hearty Sunday dinners, family reunions and close company of his extended family while visiting his grandparents, aunts and uncles. This love for family gatherings continued throughout his life. He enjoyed family events, and often reminisced about the beautiful moments of chatting, eating and laughing with those so close to him! Coming from large families on both his maternal and paternal sides, he had a countless number of cousins. To him, each get together was “a royal event.” His last family celebration was for his ninetieth birthday a little more than a month age. He often sacrificed his own needs to care for his family as well as others. He joined the Mount Level Missionary Baptist church at an early age. In 1950, he joined a musical group called the “Harps of Harmony Quartet” of Durham, NC. He sang as lead tenor and played the guitar instrument. He was also a member of the Carolina Rooster Club. He enjoyed playing the guitar, gardening, hunting and fishing. He eagerly taught anyone who desired to learn about these pleasures! Lawrence was employed by Colonial Stores for 40 years as a licensed Forklift Operator and Supervisor. Though retired, he also worked at IBM and the U.S. Postal Service for several years. He departed this earthly life on November 10, 2016 at Duke Regional Hospital. He was preceded in death by his wife, Louise Hawley Daye of 66 years; his son, Dexter Daye; and his brother, Calvin Daye. A faithful and devoted husband, father, grandfather and uncle, Lawrence W. Daye, Jr. leaves his daughters Joyce and Elvira, and his sons Donnell, Lawrence and Alexander to mourn his loss, but also to cherish his memory and the legacy of his years. He leaves six grandchildren to do the same: Evita Danielle McAdoo, Crystal DeGoede (Nate); Donnell Daye, Jr., Tony Lamar Daye, Dartagnan Marnier McAdoo, Dr. Egypt-Rah McAdoo-Smith (Michael); three step grandchildren: Haley Barnes, Genera Barnes Nelson (Brian), and Tanisha Barnes. Three great grandchildren: Charlotte Antoinette DeGoede, Lana Daye, Chapel Noelle Smith; Two great step grandchildren: Tavoria Walker and Tanyla Smith will miss, but will fondly remember their “Papa.” He also leaves two special nieces - Jennifer Cox and Kathy Smith; a host of nieces, nephews, cousins and friends. The family is especially grateful to his son Donnell (Stephanie), Lucy Smith and Pam Harris for their love and watch care throughout the period of his illness and decline. May His Soul Rest in Eternal Peace.

Mr. Lawrence Daye, Jr., the son of the late Lawrence W. Daye, Sr. and Maryola Clemons Daye was born on September 29, 1926 in Granville County. He received his education in the Granville County Public School system. On September 17, 1947, he... View Obituary & Service Information

The family of Mr. Lawrence Daye Jr. created this Life Tributes page to make it easy to share your memories.

Send flowers to the Daye family.