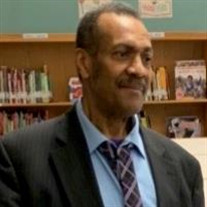 Levonne Hardy was born January 19, 1948 in Craven County North Carolina and departed his earthly life on Sunday, September 20, 2020 at the Durham Veterans Administration (VA) Medical Center in Durham, N.C. He was the oldest of four sons born to Mance Hardy, Jr. and Margaret King Hardy. After graduation from Newbold High School, he enlisted in the United States Air Force and served his country honorably from July 1, 1969 until July 6, 1971, when he was placed on the “Temporary Disability Retired List” because of a physical injury incurred in Vietnam. Following his discharge, he worked in housekeeping and as a security policeman at the VA Medical Center in Durham. He was also employed by the Durham Public School System and at Durham Technical Institute. While employed at Durham Technical Institute, he earned an Associate Degree. In 1978, he married Maxine Lemay and to this union three children were born: Levonne Hardy, Jr., Kaleshia V. Hardy and Sherita M. Hardy. Anyone who knew him knew the love that he had for his family because he talked incessantly about them. Trying to do what was right in the sight of the Lord and helping others to the best of his ability were his guiding principles. Levonne’s greatest passion was assisting and encouraging other disabled veterans to obtain the benefits they deserved as a result of their military service to the United States of America. On the second Tuesday of each month, he could be seen among the veterans at their monthly meeting held at the Hayti Heritage Center in Durham. As a youngster he surrendered his life to Christ and joined Queen’s Chapel Baptist Church in Vanceboro, NC. Realizing the importance of family worship, he made the decision to worship with his family and joined Markham Chapel Missionary Baptist Church in Durham, NC in 1989. There he served the Lord as a Deacon, a member of the Governing Board of Deacons and Trustees, a member of the Finance Committee, and a strong supporter of the Markham Chapel Male Chorus. Levonne was preceded in death by his mother Margaret Hardy Lawrence, his father Mance Hardy, Jr., and two brothers, Raeford and Wyman Hardy. Remaining to carry on his legacy are his partner for life, Rev. Dr. Maxine Hardy of the home, a son, Levonne Hardy, Jr. of Durham, two daughters, Kaleshia Hardy and Sherita Gillespie (Laurence), a daughter added to the family by God, Shavonne Cunningham, all of Durham, a brother, Clarence Hardy of Vanceboro, NC, a sister-in-law, Joy Hardy of Oklahoma City, Oklahoma, two aunts, Mary Lee Harper and Sarah Lovette, both of Vanceboro, NC, five grandchildren: Jaylen, Janiyah, Malachi, Khalil and Lauren, and a host of other relatives and friends. A Service of Celebration has been scheduled for Tuesday, September 29, 2020, at Scarborough & Hargett Celebration of Life Center, Inc., 309 N Queen Street, Durham, North Carolina 27701 at 2:00 pm, with a viewing from 1:00 p.m. - 2:00 p.m. *Attendance at the service is limited to fifty individuals and in every effort to protect our families and their guests, face coverings are required upon entering our facility.

The family of Mr. Levonne Hardy created this Life Tributes page to make it easy to share your memories.

Send flowers to the Hardy family.